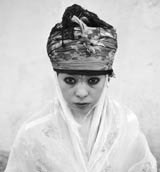 Laurent Delaye, who has lived in the UK for 15 years and runs his own gallery, the Laurent Delaye Gallery, says that ‘the YFA line is not going to stick. What happened here cannot be imposed on other countries, and there are major differences. The YBAs were explicitly anti-intellectual, while language has been important to the development of contemporary French art, which is maybe the thing that has hindered its international spread.’ The French, he adds, have a handicap when it comes to the art school system: ‘The Beaux-Arts schools are no competition to the British schools’. For Made in Paris, Delaye is showing the work of three photographic artists: Ryuta Amae, Philippe Durand and Jean-Pierre Khazem.

Made in Paris takes place in various London galleries and venues: from the Victoria & Albert Museum’s retrospective of fashion photographer Guy Bourdin, a keynote show of the event; the new and notoriously expensive West End restaurant Sketch, which will show videos to the East End stalwart the Chisenhale Gallery. The work is mostly contemporary, although there are a few older names like Brancusi and Jacques-Henri Lartigue, whose oeuvre dates back to the ‘School of Paris’ years in the early part of the 20th century. There’s Orlan, infamous for having plastic surgery in the name of art, and there’s even camp snapper duo from the 1980s, Pierre et Gilles. There’s some geo-political photography that isn’t quite reportage: notably Laurence Leblanc’s photographs of Cambodian children born since the Khmer Rouge era, to be shown at the Photographers’ Gallery in June, then there’s Marc Riboud’s photographs including his famous pictures of Ghanian children on the beach and his fabulous image of a painter on the Eiffel Tower, tottering precariously along a girder, which will be shown at west London’s HackelBury gallery.

Of course, in the past 40 years or so France has nurtured some world-famous contemporary artists, designers and photographers: among them names such as Philippe Starck, Christian Boltanksi, Helmut Newton and Bettina Rheims, to name but an eclectic few. In design, we have recently seen a new wave of French designers fÃªted in London, including the Bouroullec brothers and Matali Crasset.

Also, as every picture editor knows, there is a certain eminence in French photography. France is the home of Magnum photography and its founder, Henri Cartier-Bresson, as well as having been the theatre of operations for pioneers such as Eugene Atget, Brassai, Jacques Henri Lartigue and Robert Doisneau, and it maintains important photographic exhibitions from the Perpignan’s annual Visa Pour L’Image festival of photojournalism, and the Rencontres Internationales de la Photographie in Arles. The most important photographic show in Made in Paris is a selection of photographs to be shown at the David Gill Gallery from Paris-based photographic gallery the Maison EuropÃ©enne de la Photographie: including Bernard Faucon and Ali Madhavi as well as Newton and Rheims.

Indeed, Borgeaud reckons that the French take photography more seriously than the British. ‘We’re aware of photography as a real art,’ he says. ‘The British divide it up a bit more, and photography here is a bit more marginal. Also, the French have been interested in collecting photography for a long time.’ That’s fair in a way: the Tate does not collect photographs (although the V&A has a collection), whereas the MuseÃ© d’Orsay – Paris’s equivalent of Tate Modern – has had an exhibition space for 19th century photographs for around a year. Then there’s a new space in the Jeu de Paume, the exhibition centre in the Jardin des Tuileries, which is to be dedicated to photography and will open in two years time. By then, if the ‘Made in Paris’ effect works, some of its earlier cultural prestige might well have drifted back to this corner of old Europe.

Made in Paris events run throughout May and June in various locations. See www.institut-francais.org.uk/madeinparis for details