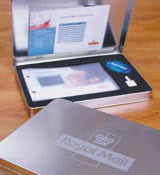 With an ugly climate in much of the business world, sitting pretty on a public sector design roster would seem like a good place to be. Many designers have seen the Government’s extensive spending programme as a cue to cash in. And with Transport for London appointing 35 consultancies and architects to a £20m, three-year programme of projects, it would be no surprise if people sensed a ‘quids in’ atmosphere (News, DW 10 April).

Even larger groups, which for years ‘wouldn’t be seen dead’ on a public sector roster, according to Hoop Associates founder Sean O’Halloran, are keen to get a piece of the action as corporate work dries up.

But Royal Mail, still wholly owned by the Government yet subject to market forces, recently highlighted the other side of the coin. Royal Mail head of marketing Paul Troy intends to halve the number of consultancies on the brand’s books, aligning instead with an ‘integrated’ lead group and a handful of specialists (DW 7 April). Cost reduction is cited as a key driver.

‘We’re trying to make the management of groups as simple as possible,’ says a Royal Mail spokesman. ‘We don’t want beauty parades. We’ve done too much worrying about whose turn it is [for projects].’

Given this mixed approach, are public sector rosters a recession busting solution or simply an administrative headache with little payback?

‘They’re very much a mixed blessing,’ says O’Halloran, largely from the perspective of securing a slot in the first place. Hoop is on TfL’s advertising roster and does design work for the NHS, Department for Transport and Crown Prosecution Service, among others.

With the information required for initial ‘expressions of interest’ running from 30 to 50 pages, O’Halloran says preparing a bid can be ‘like pulling teeth’, though he now has a ‘fine tuned’ template.

Emma Collins, marketing consultant at Bristol-based Bi-Design, agrees that the form-filling can be ‘long-winded’, but suggests the time and effort is not much different to a standard pitch. Bi-Design is newly appointed to TfL’s roster and has worked with Royal Mail for 11 years. Creative director Carol Whitworth has been a staunch advocate of rosters in the rather hackneyed ‘supplier or partner’ debate (Design Business, DW 27 June 2002).

But consultancies should be clear about what is meant by ‘roster’. TfL head of design Innes Ferguson shuns the word, partly because it smacks of Buggin’s Turn, but also because of legal terminology. He prefers to refer to ‘framework agreements’, which, under EU procurement law, are contractual affairs that set out terms and conditions – ‘rules of engagement’, as Tenders Direct sales and marketing manager Duncan Campbell puts it.

Tenders Direct provides a website, www.tendersdirect.co.uk, with a link to the Office for Official Publications of the European Communities. It publishes details of all public sector contracts above a particular threshold, based on the average value of awards in a year, currently £100 000. The aim is to ensure a level playing field for bidders by making information accessible to all.

Public sector procurement practice remains a ‘mixed bag’ though. Some local authorities still use approved supplier lists, which can be ‘little more than Yellow Pages’.

Campbell explains, ‘They’re a grey area and there’s some scepticism about them – some feel that they’re not always actively managed. The information needs to be kept up to date and this is an onerous task.’

But, he observes, judging applications on ‘best value’ rather than lowest cost is becoming standard.

Although the public sector is paranoid about ‘giving any level of advantage’, Campbell says it is perfectly legitimate to request a meeting with procurement bodies before a tender begins. Not only does this ‘put you into the mind of the buyer’, but it can actually improve how tender documents are specified.

O’Halloran is also frustrated that while procurement rules make the opportunity available, there is ‘no standard model’ about how rosters operate in practice. Sometimes groups are still asked to pitch for free. ‘It’s outrageous,’ he says. ‘If you’ve met the right criteria, you should never have to work for free.’

O’Halloran says the TfL roster is the best he has experienced. Work is regular – 15 projects in nine months, he claims – and ‘we never quibble about fees’.

Of course, frameworks are essentially trade-offs: a potentially constant supply of work at prices that may be locked-in for three to four years, the average length of a roster agreement. Consultancies and procurement teams will ‘battle it out’, as the Royal Mail spokesman says, to reach a compromise.

Like Whitworth, O’Halloran does not believe rosters are any impediment to good creative work. Relationship building with those commissioning creative work is ‘probably the most contentious issue in some respects,’ he adds. ‘If a buying department sits between the client and yourself, you’ve no chance to do that.’

As in any situation, much depends on the individual you are dealing with, says O’Halloran. And preparing to work with the public sector is ‘a bit like preparing for parenthood,’ he adds. ‘Nothing prepares you for the real thing.’