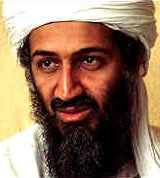 Tracking down the world’s most wanted man must be a thankless task. But while the US military has come about as close to unearthing Osama bin Laden as the UK police force has been at finding Lord Lucan, at least the opportunity to vent a little frustration is at hand.

Rumours that George Bush has bought a Saddam Hussein version of the doll and is squeezing it slowly as you read this are highly believable.