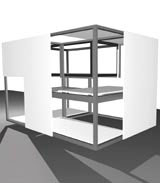 The Design Museum Collection features a new series of displays in which the Design Museum explores themes of 20th and 21st century design. Each module contains furniture, products and other industrially produced objects, which illustrate how particular design periods were characterised and defined by the use of specific materials.

The main differentiations are tubular steel for the 1920s, plywood for the 1930s, fabric and ceramics for the 1950s, and plastic for the 1960s. On display is a version of a modern design optimism in each decade, defined by mass-produced affordable objects made possible by cheaper materials and advances in technology.

‘Alice Rawsthorn [Design Museum director] initially referred to these units as “Wendy Houses”, as something into which the public could peer, although I would call them modules,’ says Ben Kelly Design interior designer and founder Ben Kelly. ‘She asked us to create units that would be de-mountable, storable, flexible and re-usable. We thought they should be elegant with a quiet strength.’

The four systems are designed to go together in different configurations, to have a life beyond the exhibition space and contain different objects. Comprising a steel frame with lacquered MDF panels, the rectangular-shaped modules on wheels have raised levels and differing sections, some open and some divided by transparent acrylic screens. ‘There were obviously security issues, some pieces were quite valuable and fragile so they need to be contained,’ says Kelly.

Working closely with the curator Gemma Curtin, designer Patrick McKinney and Kelly developed an understanding of how best to display the objects. On each side of the module is the main introduction text, set in the decade’s most influential typeface. The 1920s case features chairs by Marcel Breuer and Ludwig Mies van der Rohe with the main text set in Futura, the 1930s contains a glass by Alvar Aalto and ceramics by Clarice Cliff with text set in City, the 1950s a cutlery set by David Mellor and a 1946 coffee table by Charles Eames with text set in Univers, while the 1960s module narrates the changes of that era in Antique Olive and shows chairs by Verner Panton, Jo Colombo and Robin Day.