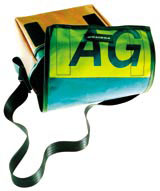 Switzerland is a land of easy clichÃ©s: chocolates, neutrality and watches are some of the obvious ones that spring to mind. On the design front it’s the ubiquitous Helvetica font and precise, austere, industrial products that epitomise Swiss creativity. Recently it’s been billed in the style press as achingly hip, a place of quirky design and cutting-edge fashion. It has to be said that isn’t my first impression as I sample Zurich’s vibe.

But two brothers, Daniel and Markus Freitag, do their best to dispel my cynicism. Freitag means Friday in German and the brothers have adopted the laid-back feel that characterises the best day of the week. Quick to laugh with a sense of self-deprecation, Daniel is a graphic designer while Markus has an exhibition design background.

Together the brothers launched Freitag, their eponymous brainchild, in 1995, when they were both still in their early 20s.

The company creates bags, wallets, footballs and punch bags and the brothers are responsible for product concepts. They also designed the company’s identity, website and packaging and have created interiors at its two flagship stores.

We meet at the group’s head office, located on an industrial estate – the Technopark – in Kreis 5, Zurich’s old manufacturing district. Reminiscent of London’s Clerkenwell ten years ago, the area is awash with warehouses that are being converted into designers’ and artists’ studios, with a smattering of well-hidden bars.

The office is functional – no fusbal table or cappuccino machine here. But there is a staff bar, think Hoxton not Soho, and a loosely designated area for kicking a football around.

I ask the brothers what they consider the best aspect of Swiss design. ‘It’s compact and high quality,’ says Daniel. And the worst? ‘It’s small and expensive.’

The brothers grew up facing Zurich’s equivalent of the M1 and were always disturbed by the trucks and general traffic thundering by their bedroom window. ‘We hated those trucks,’ says Daniel, the younger and more expansive of the two. In revenge they decided to create products that could be manufactured from the tarpaulins of curtain-sided trucks.

The mainstay of the company’s range is its bags. Available in seven styles, including messenger, DJ and handbag, each bag is a one-off design. Bags are art directed when the cutlines are drawn, giving each an individual combination of colours, letters, logos and shapes.

Billed in one tongue-in-cheek press release as ‘a bag for the light green/ pale red eco-socialist’, the product’s environmentally-friendly credentials are impressive. Made almost entirely from recycled or reclaimed materials, the used tarpaulin is finished with bike tyre inner tubes and reclaimed seatbelts. But Daniel is keen to stress that the range has a design-led appeal.

‘People don’t buy the bags because they are recycled. It’s a well designed, appealing fashion product first and an eco-friendly product second,’ he says.

It’s the bags’ singular design that gives them their appeal and the brand has become a calling card of credibility in Zurich. If you’re young, vaguely hip and slightly off centre, you’ll own a Freitag bag. In Zurich as well as in London you’ll see the brothers’ urban-eco chic everywhere.

The Freitags are keen to build on the individuality of the product and now aim to give customers creative control over the design of the bags. At their website, www.freitag.ch, customers can download copies of tarpaulins, cut their bags, play around with the design until they’re happy, then order a bag that is ‘not only unique, but also designed by you’.

The company has two flagship stores. The first, in Davos, was chosen for the unashamedly selfish reason that the brothers enjoy snowboarding. Described by Daniel ‘as essentially one big sauna’, the store is clad in wood, with wooden floors and sauna-style banquettes.

A Hamburg shop opened last autumn on the city’s ‘art mile’, next to a club and art gallery. Daniel highlights his obsession with trucks when he describes the area as ‘basically surrounded by artsy people and with happy truckers driving by all day shaking our windows’.

Interiors were created in collaboration with architect Christian Meili and the store has an industrial feel, with exposed merchandise systems and bare floors.

Freitag now employs more than 30 staff and more stores are also planned. Daniel, who ‘loves Japan’, would like to see the company open a shop in what is one of the group’s biggest, and fastest growing, markets. There’s also a Lars MÃ¼ller book on the group and a couple of big Swiss design awards in the bag.

It looks as though the Freitag brand might be one to Swatch.

Wedgwood fired up by its flagship

Robotic shark to be star of Wildlife Special