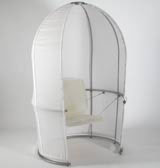 Twenty-eight young product, furniture and graphics designers were given a personal and financial boost last week as winners at New Designers’ Future of Design Awards in London.

A graphic design graduate from Nottingham Trent University, Phil Robson, won the top award – the Business Design Centre New Designer of the Year for Part Two of the show – for his graphics portfolio. A broad mix of media, it includes experimental video work on the occult, a tongue-in-cheek branding project on an imaginary water brand from Nike and a ‘conceptual thinking’ coffee-table book called Conversion.

The latter focused on five elements – people, transport, commerce, technology and communications – and illustrated how they converged in one setting, a car park.

‘I wanted to show, for example, how technology such as ticket machines means people lose jobs,’ says Robson. The win is ‘the kick-start I need,’ he adds. He won £2 500 as well as accountancy and PR support.

‘Young designers in 2003 are graduating at a particularly interesting time, when more people will be receptive to their work than ever before,’ says Rawsthorn. ‘The level of interest in design has never been higher and there is also a greater need for innovative design solutions.’

Robson was up against 27 young designers for the award, each winners of different categories themselves. Charlie Fowler from Buckinghamshire Chilterns University won the Allermuir award for furniture manufacture for his inter-linking seating system. A second seating system – Russell Lee’s ‘useful’ multi-functional sofa – scooped the British Contract Furnishing Association award for design in the international market.

A tent-like ‘cocoon’ with a sheepskin seat by Julia Spilker, a ‘calm space amidst chaos’, won the Real Sheepskin Association-sponsored award for furniture and furnishings. Spilker is a graduate of London Metropolitan.

The National Endowment for Science Technology and the Arts introduced its Graduate Pioneer Programme, which aims to help young graduates design new types of companies and create new markets. Dyson, Debenhams, Hallmark and Icon supported various zones within the event.