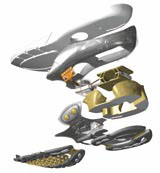 At the other end of the spectrum, the vogue for mass customisation is allowing consumers to assume the role of designer, creating personalised products to suit their needs.

Take Nike iD. This system allows customers to build, specify colours and even create a personal iD for their own shoes via a simple process. Styles such as the Air Pegasus 2000 can even be customised to accommodate specific performance needs. Until now, this service has only been available on-line, but a Nike iD pod, designed by HMKM, is now available in-store at Niketown London.

HMKM’s ‘pod’ incorporates three stations, each with its own touch-screen monitor, where customers can create their own shoes. Opposite, a selection of Nike’s 13 ‘customisable’ styles is mounted on rotating poles, creating a moving exhibition area below a large plasma screen. ‘The idea is that the customer will be enveloped by the world of Nike iD,’ explains Christian Papa, director of interior design at HMKM. ‘It’s about taking the customer on a journey and ensuring they fully understand the experience before they sit down to create their own personalised trainers.’

Behind the stations, a glass display case filled with the 3D components that make up a Nike shoe entices customers further into the creative process. HMKM has even created wallpaper based on a digital illustration of this process, designed to further intensify the experience.

Elsewhere, Puma has teamed up with Philippe Starck to create ‘shoes that have one foot in today and the other in the future’, according to the designer. Combining Puma’s technical production savvy with Starck’s ‘no design’ philosophy, the three styles – Superhigh, Mid and Low – launch this autumn. Available in ‘dark gull gray’ or ‘gray dawn’, accented with contrasting colours on the heel, the clean, modern design is just part of the story. Technical precision is hidden behind Starck’s understated design: compression-moulded rubber outsoles with a micro-herringbone tread pattern are derived from deck shoes, and there is X-static (a textile-fibre with a layer of pure silver bonded to its surface) in the shoes’ uppers.

Although there have been no such high profile collaborations at Nike – most of its shoe design is carried out in-house – the company does work with smaller designers and artists on a regular basis, such as renowned New York graffiti artists Stash and Futura, with whom it created the Nike Air Force One Hi Stash Edition and Nike Blazer Futura models.

Adidas continues to team up with big names in fashion design: now in its fourth season, its Y-3 range, designed by Yohji Yamamoto, has been a huge success. With Adidas representing sport and Yamamoto representing style, the company claims that ‘both symbolise true craftsmanship as well as a relationship which embodies cultural exchange and mutual respect’. New for Autumn/Winter 2004/05, the Y-3 footwear range covers traditional American sport silhouettes such as bowling, baseball and basketball shoes with a contemporary twist.

Such growing focus on design, coupled with giant leaps in technology, should keep sports shoe brands at the top of their game.