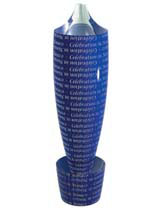 Cradled within the decadence and indulgence of Monte Carlo, the three-day Luxe Pack trade show was an opportunity for young designers to display their talents and network with prominent professionals from the world of luxury goods packaging. The competition, at the end of this year’s fair, had the theme ‘Celebration in Monaco’, with the brief to create a marketable luxury bottle of water.

As an international contest, the award attracted entries from Europe, Asia, North and South America. The first stage of the competition, held earlier this year (DW 4 August), required the designer to submit drawings, sketches and a detailed description of their product. At last week’s second stage, they were required to bring a finished model.

Aimed exclusively at young professional designers from all sectors, with between one and five years of experience, the competition originally attracted more than 700 entries.

After the first stage, one candidate from each country was awarded €2000 (£1340), a free trip to attend the contest’s grand finale and a mentor from the design world to advise them on their final product. Joined by a Luxe Pack judge and a sponsor, the international judging panel was made up of members of luxury brand firms, as well as celebrities from the design world and the press. Each finalist produced a model of their luxury water bottle and gave a 15-minute presentation to a judging panel and members of the public.

The €10 000 prize (£6720), and recognition as a promising packaging designer, went to the Spanish finalist Rubén Piquer. With his aptly-named bottle Celebration in Monaco, the industrial designer took the idea of water as the ‘basis’ of life. Inspired by amphora, the ancient Mediterranean travelling container, Piquer says he fused history and modernity, placing Celebration in Monaco within the contest’s Mediterranean context and bringing consumers ‘a bit closer to (their) roots’. The Mediterranean blue and italicised labelling on the vessel’s outer seal complete the notion of luxurious elegance and freshness. Made of transparent crystal, it is designed to suggest quality while remaining recyclable and therefore more marketable. Intended to be used only once, the bottle remains a symbol of extravagance. Piquer emphasised the importance of the preservation of the quality of the water by designing an opaque seal at the bottle’s opening, to act as a barrier to ultra-violet rays.

According to France’s Michaël Radix, his design, l’O, is an expression of celebration. Connected to ‘an irreversible and symbolic action’, such as smashing a bottle of champagne or cutting a ribbon, it embodies the decadence of destruction. The Italian finalist Francesco Mansueto’s creation, B’eau, centres on ‘flexibility and elegance’, allowing personalisation of the bottle with luxurious jackets for all occasions, making it ‘an object of display’. France and Italy were both awarded special last-minute recognition as runners-up. The finalist from Britain was Lewis Macintyre, design director for 999 Design in Glasgow (DW 4 August). Macintyre’s luxury water bottle, Monac’eau, aimed to bring together venue and product. Inspired by ‘the sculptural qualities of water in motion’, Macintyre’s creation is reminiscent of a falling water droplet, designed to hang suspended in the air, with no flat base. Adding to the notion of luxury, the design is not complete alone and must hang from its specialised cap, be placed in ice, or on a specially crafted bar. Made from clear flint glass, Monac’eau suggests purity and elegant simplicity. The logotype is embossed so as not to ‘detract from the purity of the water inside’. Unfortunately, Monac’eau was seen to resemble, too closely, a previously released water bottle. However, Macintyre says he was ‘praised for his forward thinking and marketing vision, as well as for the aesthetics’ of his creation. As the only graphic designer in the competition, this recognition of marketing potential is especially important to him.

• Concept originality and use of materials

• Style and form of presentation