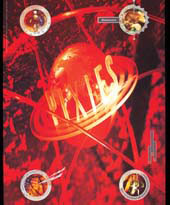 Record label 4AD, famous for signings such as Pixies and Cocteau Twins, is about to celebrate its 25th birthday. Richard Clayton speaks to its legendary designer Vaughan Oliver about his seminal sleeve designs

‘Red wine,’ Vaughan Oliver announces. ‘I don’t know how well you know your red wine, but that’s an extreme version of the letters on a bottle of Mouton Cadet.’

We’re looking at an Xmal Deutschland sleeve in Visceral Pleasures, Rick Poynor’s monograph on the 4AD design supremo, using it as a scrapbook for his career with the record label, which grew from post-punk obscurity to spawn Pixies, and next month celebrates its 25th anniversary.

‘My approach to typography at college was all wrong,’ Oliver continues. ‘It seemed like something I had to learn another language for. All the different measuring sizes – feet and inches were good enough for me – and then the typefaces. How did you ever choose the right one?’

Only when he came to London, starting with Benchmark and then Michael Peters & Partners, did Oliver get to grips with it. Drinks labels initially inspired him. ‘Looking at them closely, there’s often a use of extremes – very thin, condensed faces working with more extended ones. I enjoyed that, but it was too mainstream for me,’ he says. 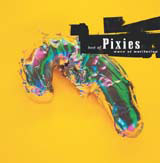 Luckily, Oliver was moonlighting in the music world, where his illustrative skills – developed under Terry Dowling at Newcastle Polytechnic – had more free rein. While every great designer needs a sympathetic client, Oliver discovered an artistic patron in Ivo Watts-Russell. The 4AD founder made him his first full-time employee in 1983. Soon, he was collaborating with a photographer friend, Nigel Grierson, under the moniker 23 Envelope, and pushing the boundaries of what sleeve design could be.

Cocteau Twins and This Mortal Coil were among the early briefs for 4AD’s ‘graphic auteur’, as Poynor describes him. ‘Ow-turrr,’ says Oliver, his Geordie vowels, savouring the Gallic import like an oenophile Jimmy Nail. His textured, multi-layered aesthetic had already become apparent.

‘Cocteau Twins were very abstract,’ he recalls. ‘They didn’t like any subject matter being used, so the design was about atmospheres and moods, which is generally something we tried to take from the music.’

Oliver’s methods, though frequently ingenious, seem old-fashioned now, but he revels in having been around the block. ‘You’d be surprised how much of it is one shot. Remember, this was when artwork was put together on boards, in black and white, and all the colours were a direction to a printer,’ he says.

Ah, the glory days. If not jumpers for goalposts, then certainly a canny use of found elements, such as printers’ run-on sheets. ‘It’s the juxtaposition of images that were never intended to go together,’ he enthuses. ‘Discarded ephemera that the designer brings his eye to and says, “Oh, there’s something worthwhile in there”.’

Oliver and Grierson fell out in the mid-1980s. Not long after that, 4AD signed Pixies, Ultra Vivid Scene, and Throwing Muses – ‘a big influx of energy’. In 1988, he became an in-house freelance, establishing v23 with Chris Bigg.

‘Christo’, as Oliver tends to call him, is still there now – beavering away on the limited edition CD case the pair have created for 4AD’s 1980 Forward retrospective. Fans can select their favourite tracks on-line and order ‘bespoke’ 4AD compilations in v23’s exclusive packs. Chances are, Pixies will figure strongly.

‘Charles [Thompson IV, aka Black Francis and Pixies’ chief] would discuss the films he liked, especially David Lynch, and he enjoyed nudity, too,’ Olivier says. ‘I took the darkness and the atmosphere in the music, but also found a release valve, some kind of humour.’

Photographer Simon Larbalestier was his other accomplice, performing a similar role to Jim Friedman with Lush, and Jason Love with the Breeders. After the perverted patinas and Joseph Beuys-like artefacts of Surfer Rosa and Doolittle, it ‘all went a bit B-movie’ with the final two Pixies albums, Bossanova and Trompe Le Monde. 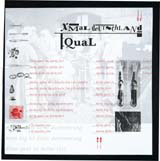 ‘I always felt we were doing work that was outside of the time,’ asserts Oliver, whose influences extend to photographer Gregory Crewsden, artist Joel-Peter Witkin and film-maker Andrei Tarkovsky. ‘If you work outside the moment you have more chance of longevity, though that’s a vain hope with pop music.’

Around 1996, 4AD’s rocky patch meant that it was several years before v23 returned to the fold. Since then, Oliver has worked with bands like Mountain Goats and Magnetophone. He has also gained L’Oréal and the Victoria & Albert Museum as clients.

Inevitably, he feels the iPod generation is missing out on the sensuality of sleeve art. It’s not pipe-and-slippers time yet, but he’s unashamedly nostalgic. ‘I used to work with a scalpel, with a comma on the end, and a bit of glue. I’m not knocking [Photoshop] – it can be a marvelous tool, but just not as much of a pleasure to work with as my old tools.’ Then Oliver laughs ruefully/ ‘They took away me tools, they took away me LP covers – what’s left?’ Well, an unrepeatable record of achievement. That’s something to tell the grandchildren about, isn’t it? l

4AD’s birthday celebration runs until 20 November, including shows, a book of poster designs and gigs. For full details, see www.4ad.com