In the 1950s, Ladybird’s What to Look for series launched with a playful, illustrative look at spring and autumn. The books – written by E.L. Grant Watson and illustrated by painter Charles Tunnicliffe – aimed to show children the changing events across the four seasons in the UK. Picture books provided entertainment and education; they also became a design classic.

The series has now been revived for the first time in 60 years by Ladybird, Penguin’s design-led children’s imprint. But in those intervening years, plenty has changed in the UK. Urbanisation and climate change has shifted the natural landscape, and the population itself looks very different.

According to the books’ illustrator Natasha Durley, that modernising element was one of the most enjoyable aspects of the creative process. “I liked thinking about the traditional texts and putting a modern twist on it,” the Somerset-based illustrator tells Design Week.

It reflects the changing way we view nature in culture today, she says. Durley, who has always been an animal-lover, says that she remembers watching David Attenborough documentaries when she was younger and how the focus would be about celebrating the animals and transporting viewers. “Now documentaries end with information about the current situation – in today’s climate, you can’t just celebrate,” she says. It’s also about people’s “effect on animals and their integration with them”.

Creating a world modern children could relate to

Illustration, Durley says, is a powerful tool to convey these messages. “It makes it fun and interesting and not a dry or heavy thing at the end,” Durley explains, citing Miroco Machiko, Charley Harper and Henri Matisse as influences.

Among the natural changes highlighted in the series is the reduction in starlings in the UK. Usually, the birds’ murmurations are visible in the autumn skies. “Many of their natural roosting and feeding sites have disappeared, due to an increase in built-up areas, and they are now endangered here,” author Elizabeth Jenner writes.

The accompanying illustrations show the mysterious formations above a cityscape against a purple-pink sky, lending the children’s series a poignant tone. “In the traditional illustrations, it’s a time where there were more animals running around and it was sweet and quaint,” Durley says. The ambition for her update was to create illustrations that people could relate to now. “It captures a mood,” the illustrator adds.

Another example is the water vole. The furry mammals were almost driven to extinction a few years ago, Jenner writes, because their natural habitats were disappearing. They were also threatened by a new predator on the scene: the non-native American mink. The conservation work to repopulate this species is a focus of the summer book.

Durley’s illustration shows the water voles playing by a canal, with a boat coming around the river bend. Together with text, it shows how the conservation work is part of the landscape now, Durley points out. “We’re trying to repopulate them back, and it’s just another part of the story,” she adds.

As well as a shifting natural landscape, Durley’s illustrations also depict modern life and making that relatable was another hope of hers. She considered details such as contemporary clothing and style when depicting people nowadays. In autumn’s return to school illustration, there are big red puffer jackets and children from all backgrounds. “If you relate to it more, you get sucked in,” Durley says.

A “layered” approach to illustration

The pictures are not the only modernised elements of the series. Durley’s bright, layered approach to illustration is a departure from Tunnicliffe’s naturalistic scenes.

For the landscape scenes, Durley creates cut-out shapes for the larger elements such as animals or trees, then scans them in, fitting them together in a “jigsaw technique”. Then she adds colour and textures like charcoal, paint or marbling. While this is a new approach for her, it allowed her to create unexpected details in the landscape, such as puddles.

There are three parts to her illustration process. First of all, Durley gathers natural imagery – either taking pictures of leaves or rocks or collecting actual objects. The next stage is the paper-cutting. During the final stage, Durley is busy “beavering” away, fitting them altogether. She also incorporates real details, scanning in the bark of specific trees for accuracy and texture.

Durley draws on top of these translucent scans so they’re subtle. In one illustration of a puffin on a cliff edge, she used photos of actual rocks and then added her own paint marks on top to get the “right feel” for the book. “Sometimes people ask, ‘how did you get that rock to look just like a rock?’ and I explain that I used an actual photo”, Durley says, laughing. 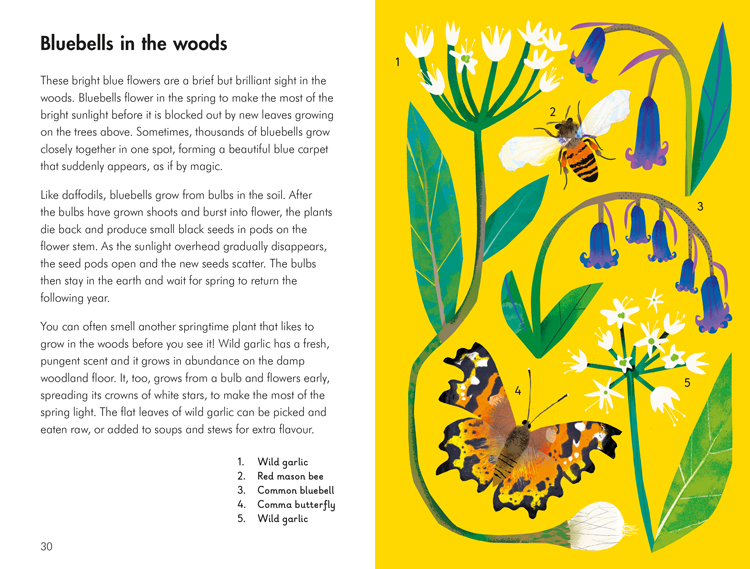 Each book took her around a month, and she was working over the final months of 2019. While it was a “dream project”, she tried to put Tunnicliffe’s original illustrations to one side and set her own path for the style. “I tried not to get too daunted,” she says.

Another big departure is the use of colour. “You see a lot of nature illustrations and they’re toned down as they have to really match the environment,” she explains. “I approach it to celebrate it – to go big and bold. It still has that excitement that fills you with emotions and makes you want to go outside.”

She did however work closely with art director James Stevens on the illustrations so that they “don’t stray too far from reality”. And by working with contemporary image references, she hopes to portray a modern, accurate and exciting landscape.

“There’s always a balance between going a bit whacky with artistic license,” she adds. “I’m now very strict about spots being in the right place, or a dusting of grey on a butterfly wing.”  This is a reference to the male orange-tip butterfly, whose food supply – spring flowers – are less plentiful now that there are fewer wild meadows for them to grow, the book explains.

“My main goal is to focus on the animals and get people interested in the natural world around them.”

The What to Look for in series is published by Ladybird on 21 January 2021.