As talks of easing lockdown begins, and the possibility of returning to work grows, attention has turned to the problem of the commute. For most people, this will involve some form of crowded transport, such as the Underground or bus.

London-based design studio PriestmanGoode has come up with a concept which aims to tackle two potential problems of busy commutes. 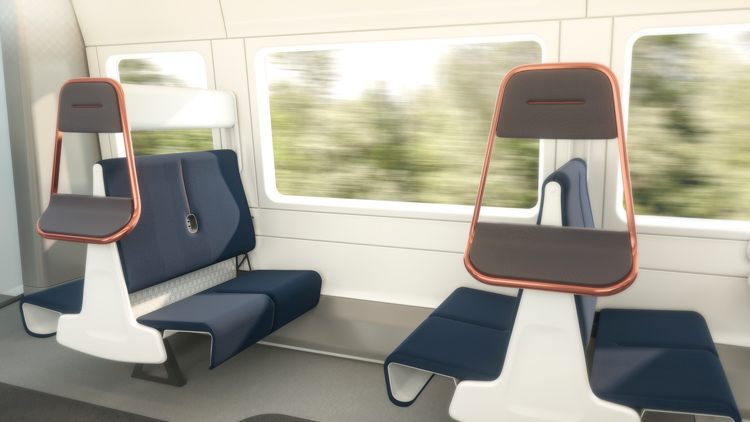 It’s a revision of its Island Bay seat, which was originally designed in 2014 as a “flexible seating solution” for commuter trains. The updated concept would allow people to store bicycles upright on a train, thereby encouraging them to cycle as part of their journey. The bikes, which clip into the seats with their front wheel, also ensure social distancing in train carriages while making use of blocked-off areas.

Paul Priestman, the studio’s chairman, says that for transport designers the “first and last mile” are “important considerations” when considering the entire journey. He adds: “People typically use their own car, buses or underground services to start and end their journey, but many would prefer to use bikes as a lower-cost and more flexible alternative.” This adaptation allows people to store their bikes “easily and safely” on commuter trains.

Designs that can adapt quickly 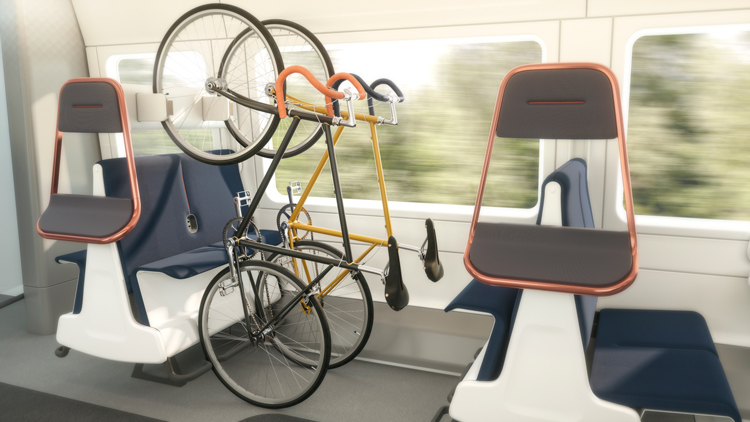 The original design was created for the Rail Safety and Standards Board, as part of a brief which aimed to find “innovative solutions on suburban services”. The flexible nature of the seats allows for 15-20% more seats and increased capacity for seats. As they fold up, they create space for people with wheelchairs, buggies or large luggage. The seats themselves also have USB ports and a larger width for comfort.

Their adaptable design also means that they could be suited to a “different set of circumstances” quickly. Priestman adds: “By installing flexible seating, train operators are able to adapt to changing customer needs.”

How could our commutes change for good?

While it remains uncertain when – and how – people will return to work, it has not stopped designers thinking about the potential issues of a new socially-distanced world. We talked to designers about what a return to work might look like in terms of working practices – how offices could be redesigned or virtual and face-to-face meetings balanced, for example.

As Priestman says, “We understand that passengers coming into London are looking to travel at a safe distance during their commute, but the prospect of a crowded bus or underground carriage may put them off making the entire journey.”

There could be a potential opportunity to rethink transport in our city beyond the pandemic. Urban planners across the UK are planning to close roads and create pedestrianise areas within cities. In Bristol’s historic town centre, for example, the council wants to create a pedestrian-only zone so that people change the way they travel through the city.

The council plans to widen pavements so that people can physically distance more easily, as well as creating cycle lanes. The aim is to think beyond the immediate crisis and encourage more sustainable behaviours. “The revision to the Island Bay seating configuration supports that goal too,” Priestman says.

The studio also believes that substituting public transport for cycling will tie in with people’s ambition to be healthier after the pandemic.

Kirsty Dias, PriestmanGoode, tells Design Week that the studio is “actively researching future mobility all the time”. This period of time has been “fertile ground” to think about “new and different ways to move around cities”.

Speaking about the closing of roads and plans to improve cycle routes, Dias says that the crisis “has mobilised and accelerated a lot of initiatives that could have taken years to achieve.” “There’s something about the energy of this period to maximise the opportunity we’re being presented with,” she adds.