After a year-long delay, Expo Dubai 2020 finally opened last week – marking one of the biggest international gatherings since the outbreak of Covid.

Almost 200 countries are taking part in the show (the first time it is being held in the Middle East), with pavilions and exhibitions designed to showcase innovation and invention across culture, science and technology. It runs until 31 March 2022 and 25 million visitors are expected.

While all exhibition content interacts with the overarching theme of Connecting Minds and Creating the Future, the pavilions are inspired by three sub-themes: opportunity, mobility and sustainability.

We’ve gathered some of the most striking pavilions from Japan to the Netherlands, as well as from the themed contributions. The UK’s entry is an Es Devlin-designed space featuring AI-generated poetry, which we reported on as it was revealed. 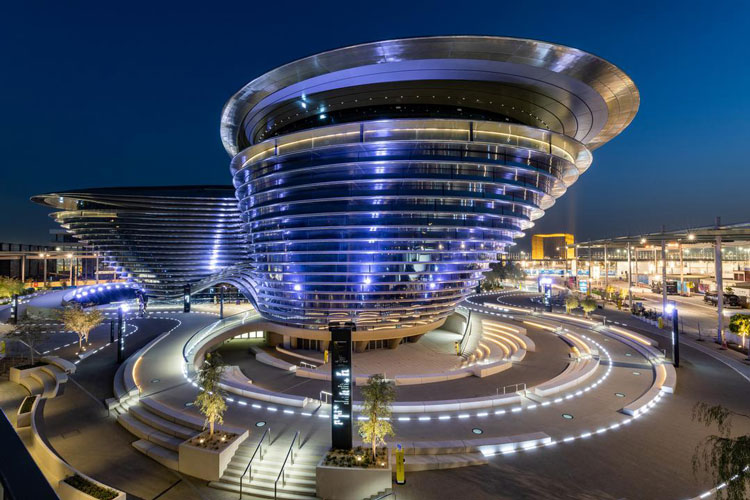 Designed by architects Foster + Partners, the Mobility pavilion takes visitors on a journey from the early days of humanity to the current interconnected digital world – hoping to highlight how mobility has driven development. The exhibition space – from London’s Met studio – showcases technology like AI, machine learning and autonomous transport with interactive displays where you can build a robot or design a spaceship. Fittingly, the pavilion also boasts the world’s largest passenger lift, according to the Expo, which is able to transport more than 160 people at a time. 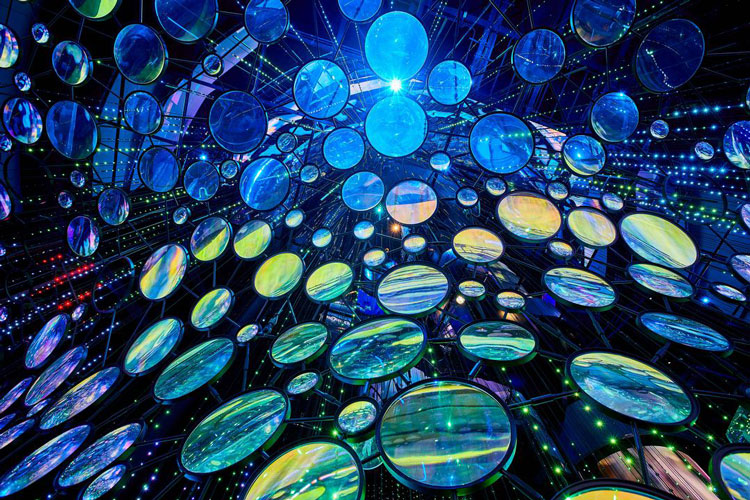 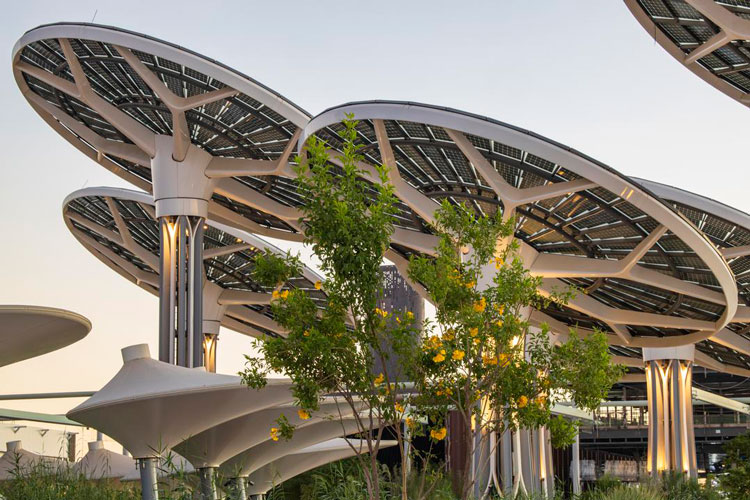 The Sustainability pavilion – known as Terra – has a difficult path to tread with its aim of highlighting environmental issues while also being a huge architectural undertaking. Designed by the UK’s Grimshaw Architects, the space is designed to meet the highest available rating for sustainable architecture (as developed by certification system Leed). New York-based studio Thinc is behind the exhibition design, which teaches visitors about humanity’s impact on the world. Terra also has almost 5,000 solar panels and 18 ‘energy trees’ which can power enough electricity to charge more than 900,000 mobile phones per year, the Expo explains. 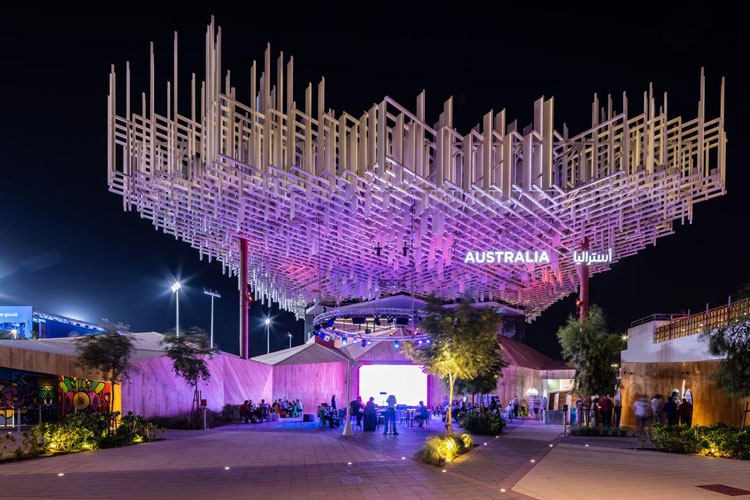 Designed by Brisbane-based studio Bureau Proberts, the Australian pavilion is inspired by the shape of cumulus cloud. According to the design team, this particular cloud’s structural make-up represents the “way in which Australia is home to multiple cultures”. The pavilion is formed from Australian composite laminate timbers and features water-saving technologies (designed by Caroma) that tracks flow throughout the building. The content takes visitors on a history of the country’s innovation, from indigenous techniques to contemporary invention. 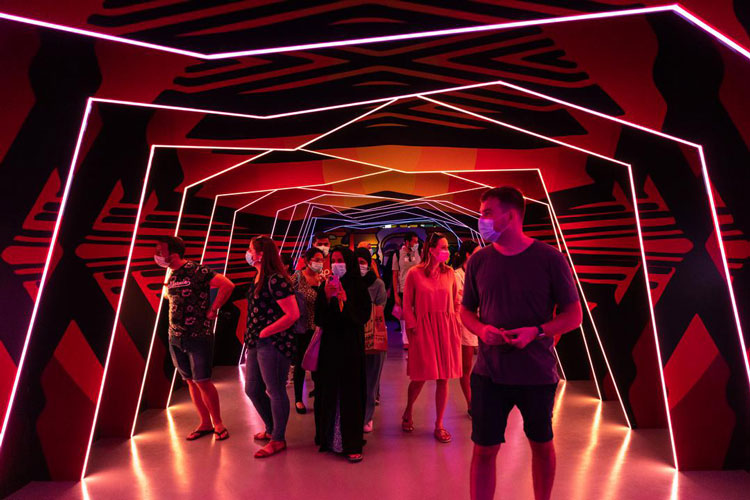 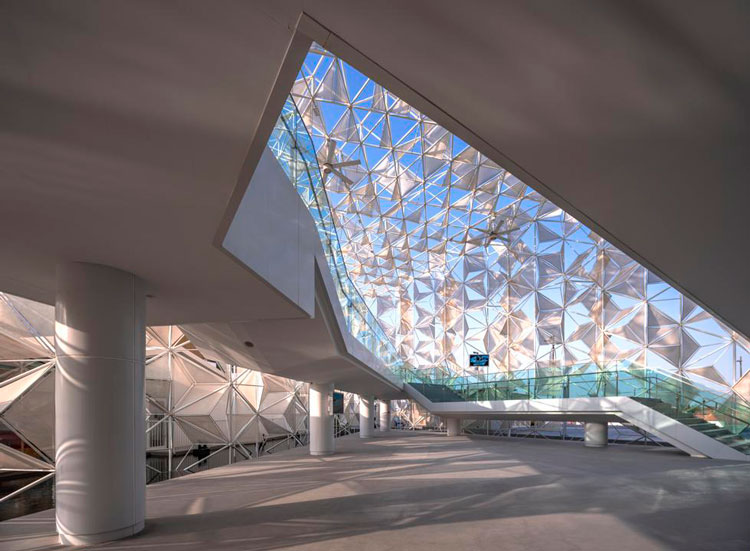 The striking façade for Japan’s pavilion merges Arabseque and Asanoha (popular Japanese patterns) styles, setting the tone for a space that highlights the country’s cross-cultural influences and developments. Conceived by architect Yuko Nagayama and NTT Facilities, the pavilion aims to be as bespoke as possible. Smartphones are handed out to visitors, which keep track of displays they show interest in, and then influence the final attraction. Throughout the exhibition, an ultrafine mist is sprayed to help visualise the 3D art projections. There’s also the chance for visitors to experience what Expo organisers call “the first step in a 360-degree theatre” with real-time generated graphic art. 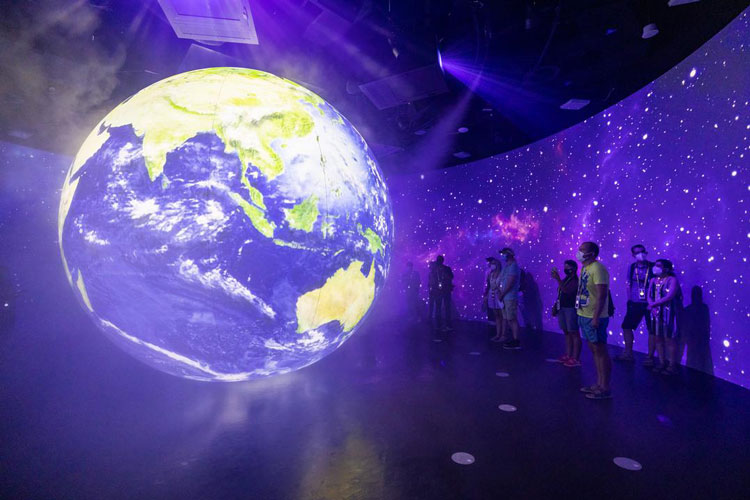 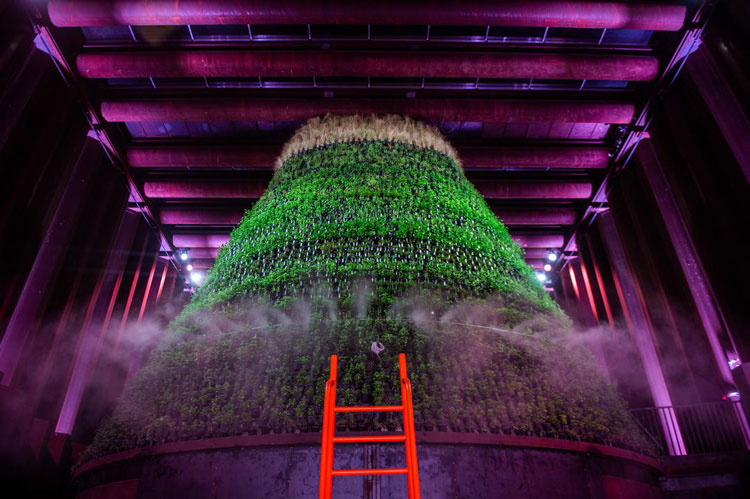 The Dutch pavilion brings together innovation across water, energy and food, in an attempt to show the connections between the three sectors. The multi-disciplinary team – including exhibition designers Kossmanndejong – has created a biotope (an ecosystem) in miniature. Circular solutions are shown on a small scale at the pavilion, which centres around a cone-shaped vertical farm. For example, water has been extracted from the surrounding desert air in an effort to grow food products. The installation has been built from local materials, and all materials are either biobased and biodegradable or will be reused elsewhere afterwards. 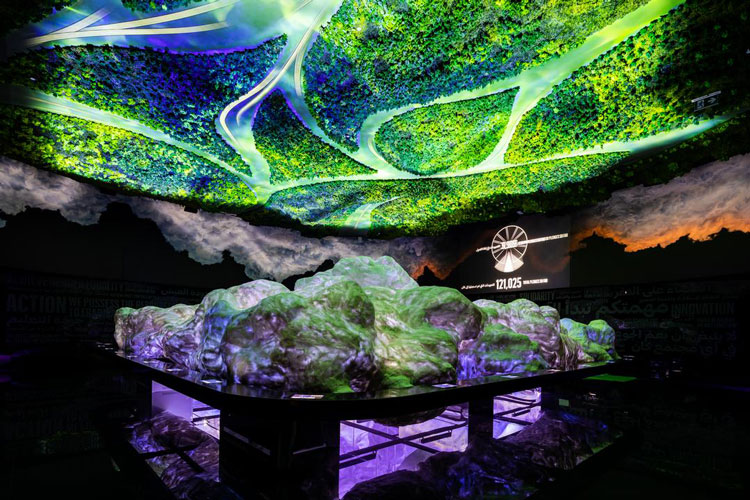 The Opportunity pavilion, which has been dubbed Mission Possible, is inspired by the role of the plaza as a place for people to meet and connect in cities. The exhibition design is a collaboration between Alec Fitout and Icaria Atelier. The space is character driven: Mariam, Abel and Mama Fatma guide visitors, showing how small actions have wider impacts across food, water and energy. The space also plays with a sense of perspective, culminating with an upside down room where visitors pledge their actions for the future. 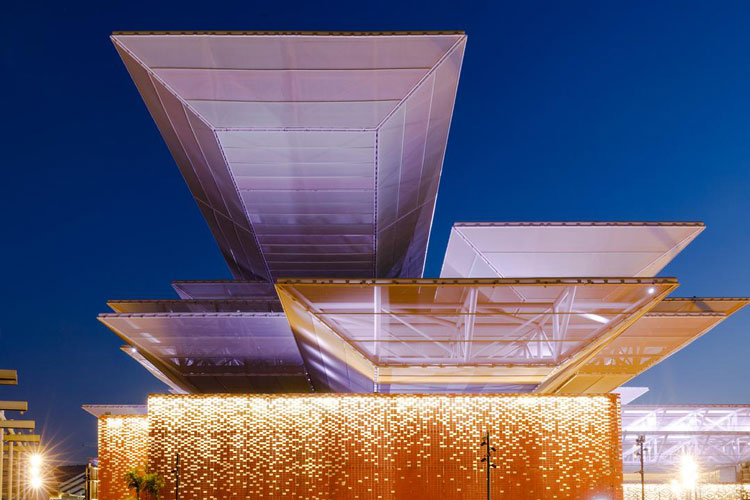 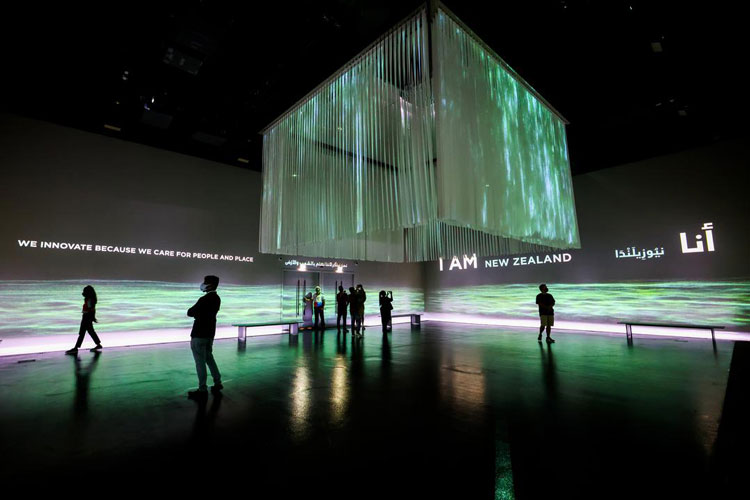 The Maori phrase kaitiakitanga – which conveys themes of guardianship – has inspired the the pavilion design for New Zealand (also known by its Maori name of Aotearoa). Design studios Haumi and Jasmax collaborated on the exhibition space, which celebrates the natural world through various touchstones in the country’s history. One prominent focus is the legal personhood status given to the Whanganui River, which aims to protect its health and wellbeing. The building also has what the designers call an “audible and visual ‘pulse’”, which moves with a low-frequency sound and creates a rippling effect on the pavilion’s exterior.