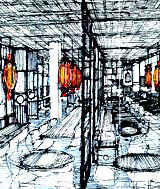 Wagamama founder Alan Yau will launch his latest ‘directional’ Chinese restaurant, Hakkasan, in March. Situated in London’s West End, interior design is by Christian Liaigre; graphics and signage have been created by North. Hakkasan is supposed to be a move away from the minimalism of modern Chinese restaurants in favour of traditional motifs, such as lanterns, screens and dragons.