Met Studio Design has created and branded a new exhibition, Conflicts of Interest, which will open at the National Army Museum in London in September.

Appointed in February following a competitive pitch against at least four other consultancies, Met Studio Design, was asked to ‘tell the story of a soldier’s family life and army life, and look at the conflict this causes’, according to Lloyd Hicks, design director at Met Studio Design.

Hoping to ‘evolve’ this into a ‘design language’, Hicks worked closely with the museum to present accounts of soldiers’ lives. Ideas for the exhibition took their lead from the identity. ‘The starting points were brand values and key experiences,’ says Hicks.

Housing the exhibition within a ‘black box’, ten conflicts are presented, each within a separate enclosure, dressed with a famous headline or news clip of media coverage at the time. ‘Entering each shows the thoughts, opinions and accounts of soldiers, and the changing world and landscape soldiers have lived and fought in over the years,’ Hicks says.

Some information was gathered from active war zones by the museum specifically for the exhibition. Researchers went to Camp Bastion, in Helmand province in Afghanistan, to talk to soldiers,’ says Hicks. ‘The whole thing has been very hands-on.’

The exhibition will focus on conflicts from the 1960s onwards and includes, Northern Ireland, Iraq and Afghanistan. The show opens on 12 September at the museum in London’s Chelsea, and visitors will be invited to ‘start a forum of debate’, Hicks says. 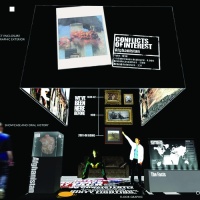 The culture of mentors adds heritage to a young industry