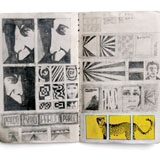 It is difficult to pinpoint a single source as the inspiration for a piece of design. Like air, it is something you constantly breathe in: a word, a picture, a story, a book, an exhibition, a piece of music, someone you know, something that happens – layers of invisible data that stratify within everyone of us.

Occasionally, these memories connect with one another to become an annotation, a sketch, an idea… and, with a bit of luck, a design.

The symbol for the Locarno International Film Festival is a leopard and for more than a quarter of a century the brief to the artists and designers invited to create the festival’s poster has centered precisely on that: a leopard.

Feature film posters have exploited the faces of actresses and actors since the very beginning of the industry, stealing expressions and drama to announce titles, venues and times of shows.

We extrapolated stills from films shown or to be shown at the festival, then cropped and combined them to tell the emotions and stories typical of cinema in posters. The yellow and black brushmarks harmonise the wide range of collected images, making the set of posters both unique and unmistakably ‘Locarno’.