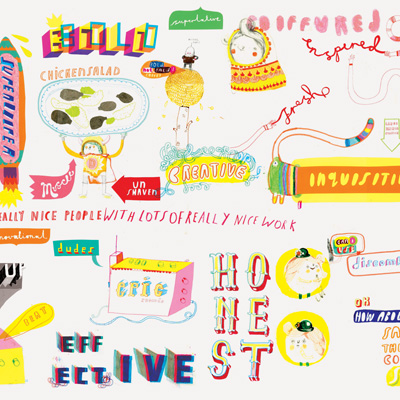 As well we know, monastic scribes of the Middle Ages spent their years bowed over tables, scratching quills across calfskin to create the world’s first books. These cowled, meditative figures are the unlikely, but direct forebears of type-intrigued illustrators like Kate Forrester and Liv Bargman.

’I find it really cathartic to draw letters, using shadow to create 3D forms, making things wriggle in and out of the letters and putting faces inside them. There is just so much you can do with type and illustration,’ says Bargman.

She is part of a wave of illustrators, designers and clients in thrall to hand-rendered typography. Forrester attributes the phenomenon to a reaction against the entrance of digital design processes a decade ago. ’Back then, it was a competition to see who could produce the swankiest effects, slickest illustrations and best vector graphics, but people have got over that now and – in the UK, at any rate – people are seeing the value in handmade things,’ says Forrester.

Evidence of this is everywhere – including in ad campaigns for clients as diverse as John Lewis and The Big Chill. A month ago, a new chocolate bar called Moonstruck launched in the US, featuring hand-drawn type by Forrester. She is also creating paper letters for fairy-tale Christmas windows at Tiffany’s in New York and London, as well as labelling for Waitrose’s 2010 Christmas food range. Bargman, meanwhile, is working with the House of Illustration on a series of science text books for children featuring hand-drawn type.

Bargman believes that there are some contexts that particularly suit hand-drawn typography, the most obvious being books. ’It communicates so much more to have the title as an illustration, that is perhaps also integrated into the front cover picture. The problem with that is that when you publish it in a different language, you have to completely redo the cover every time,’ she points out.

By their nature, hand-crafted products are more labour intensive than machined or mass-produced things. However, while something looks handmade, it may not be. Forrester reveals a disconnect between the look of handmade type and the way that it can be produced. ’I often use a computer to create my typography, which does take away some of the magic, and I am feeling a real urge to get closer to the handmade processes,’ says Forrester. She is currently working on a personal project – an entire alphabet hand-cut from paper, her first full font.

I find it really cathartic to draw letters, using shadow to create 3D forms, making things wriggle in and out of the letters and putting faces inside them

Bargman, like Forrester, is a trained illustrator who graduated in the past five years. She is interested in doing an MA in typography to discover more about the technical aspects of font design, but Forrester feels differently. ’This is not something that wildly interests me because I don’t see my work as letters, but as illustration. It is just that my illustrations happen to be typographic. If you took the letters from my work and reordered them, it wouldn’t work because they interact with each other in their context, and their meaning relates to that specifically. The talent in being a typographer is in having a set of letters that work together in any order you put them.’

While not in the market for making new fonts, Forrester does use existing ones as a base for her work, her favourites being Bodoni, Georgia and the ’light, feminine and classy’ Mrs Eaves – ’any typeface with a big difference between thick and thin is good, as are those that are serifed, as I need the scope to have an image or flourish growing from the serif’.

Graphic designer and illustrator Simon Corry is also a devotee of the hand-drawn letter. Working completely by hand, he is currently producing a full, illustrated font for The New York Times’ illustration annual. The typeface is an extension and development of a typeface Corry created in late 2008 that won him and the newspaper the Type Directors’ Club award for typographic excellence. Once published, Corry will make the font, titled My Last Star, available to buy.

’If you take the attitude that a typeface is entirely reliant on context then none would ever be created,’ says Corry. He admits that My Last Star will not have as many applications as, say, Helvetica, but believes that ’it may well serve several other purposes’ than its original application.

Says Corry, ’There is an increasingly blurry line between graphic design and illustration, to the point where the two are now interchangeable as disciplines.’