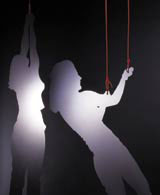 UK-based designer-makers (excluding Northern Ireland) producing furniture, lighting, textiles or accessories for the contemporary interior, who have not previously exhibited at London’s 100% Design, may be eligible for one of the Crafts Council 100% Design bursaries.

All applicants are pre-selected by the 100% Design Advisory Board of industry experts. All bursary winners are allocated a stand between 6m and 20m, which is located within a dedicated block.

This year there have been ten Crafts Council bursaries on offer, with the winners receiving a 50 per cent discount against the cost of stand space.

Born in Genoa where he completed a masters degree in architecture, Massimo Fenati’s credentials as a furniture and product designer have been reinforced by five years spent working with Jasper Morrison.

At Morrison’s Office for Design, Fenati worked on projects for Alessi, Cappellini, Flos and Rosenthal, to name but a few. In 2000 he went freelance, starting a collaboration with Pentagram partner Daniel Weil on a range of furniture and interior projects for United Airlines.

He has also collaborated with architect David Chipperfield as senior designer on products for clients such as Alessi, Fontana Arte, Ideal Standard and Valli & Valli. He has now set up his own design studio and is in talks with leading British and Italian manufacturers.

At 100% Design Fenati is showing Dido (pictured below), an anodised aluminium wall and table light and Domino, a single flower vase system constructed in white porcelain.

Launched in 2002, this bursary is awarded to first-time 100% Design exhibitors. It supports emerging design talent by providing additional stand space at the international trade show – allowing the winning exhibitors to showcase their designs alongside more established designers and manufacturers. The winners are chosen by the same panel who oversee all applications for stand space at 100% Design.

Perfectos Dragones, which translated into English means Perfect Dragons, is a team made up of six Argentinian designers from different backgrounds. Named after Dragones Street in which the studio is located, it was set up in 1999 and has so far created a range of accessories, lighting and furniture products sold in most Argentinian stores.

‘We learned about 100% Design in the press and I visited the show in 1998. Also, one of the members of the studio had worked for two months at Conran & Partners and we recognise London as one of the leading centres of design in the world,’ says Federico Churba, one of the partners.

At 100% Design Perfectos Dragones is showing a glass set called Submarino (pictured above). Churba explains its rationale: ‘When you ask in some of the many bars of Buenos Aires for a “submarino” you will get a tasty cup of hot chocolate. This typical Argentinian beverage is a glass of warm milk with a stick of dark chocolate, which you have to dip into the milk and stir. When we designed this product, we decided to use the same glass, but gave it a playful meaning. The result is a puzzle in which you have all the necessary elements to make your very own submarino: the glass, the glass holder, the mixer and the chocolate. All you need to do is add the milk.’

Non-profit organisation Mazorca Projects will have a stand at the 100% Design show this year to launch the Hidden Art Design and Manufacture Bureau, a matchmaking resource that assists designers in finding manufacturers, with a view to creating design prototypes for production.

The bureau assists designers in legal matters and also marketing information. To be part of the scheme, both designers and manufacturers need to work within the east London area. The Hidden Art stand will also be showcasing new work from 11 east London designers who have benefited from this service.

Hidden Art Design is currently seeking applications from designers who are interested in being considered for the next round of the prototype development support programme, with a view to the designers exhibiting their work at the Milan Furniture Fair 2004 and London’s 100% Design show next year. The deadline is 6 October. Contact Helen Pike on 020 7729 3800 or e-mail helen@mazorcaprojects.com.

With training in physics and philosophy and eight years experience of working in film productions, including Oscar-nominated Wings of the Doves, Gala Wright’s transition to furniture design might seem a bizarre career choice.

It was born, she says, out of ‘a full-blown obsession and desire to create my own pieces’. She graduated this summer from London Metropolitan University and has had her final-year product, the Luft Lounger (pictured above) accepted for show at 100% Design.

Inspired by Buckminster Fuller, Wright says she is interested in ‘design that uses tension rather than compression’.

Made from tubular steel, the lounger has removable covers, full collapsibility and can be used as indoor or outdoor furniture. Once assembled it holds the body in horizontal position and has a gentle rocking motion.

Design Nation is a subsidiary of registered charity The Design Trust, which promotes British design through its website www.designnation.co.uk. Candidates who want Design Nation backing are judged on the quality of their work, with an emphasis on young, emerging design talent.

When selected to join the group, the designer’s business details and information about six of their products are added to Design Nation’s website. The Design Trust offers a package of business support, in particular exhibitions such as 100% Design, running bursary schemes that provide between 20 per cent and 30 per cent discount on stand costs.

At 100% Design this year there are four first-time designers exhibiting with Design Nation.

A further ten previous exhibitors receive a bursary. The Design Trust also offers general business support to any young designer starting a business through its publication The Business Start-Up Guide for Designers. The 2003 edition is launched at 100% Design, priced £5, and is available to download through the website www.thedesigntrust.co.uk.

Afroditi Krassa could probably bank on the allure of her name alone to sell products. But the designer has also an impressive CV.

Immediately after graduating from Central St Martins School of Art & Design she spent three years working at Seymour Powell, largely managing the Bioform bra project. Eventually Krassa left the product design group to complete a masters degree in design products at the Royal College of Art because she ‘missed the creative process and wanted to take a break’.

Business sense prevailed soon after her graduation when she set up her own company Studio Krassa, which produces furniture, lights, jewellery and promotional packaging. Clients include the charity and magazine Big Issue, for which she has designed a series of matchboxes, and upmarket eaterie Sketch, which has commissioned four light pieces.

At 100% Design she is showing Pretty Big, a suspended oversized mirror (below left) and World View, a halogen light encased in a helium balloon (below right).

The Aram Store will be exhibiting the new Cassina range, shown in Milan last April and celebrates, with Artek, the 70th anniversary of the Alvar Aalto stool. Open until 8pm daily from 25-27 September.

In the new shop designed by Wells Mackereth, Bill Amberg will present his autumn/ winter collection and a preview of Leather Vessels, a collaboration with sculptor Claire Wilks. The work shows throughout 100% Guaranteed, but officially opens on 31 October.

Giulio Cappellini will be installing The House of Cappellini at Chaplins showroom, which will be on display from 24 September.

The first viewing in London of AndrÃ©e Putman rugs for Christopher Farr will be displayed at the new showroom from 26-28 September.

Max Fraser, author of the Design UK guidebooks will be the curator of an exhibition showing some of the best new furniture, lighting and accessories that have been launched this year.

The Design Museum European Show celebrates the best of contemporary design in fashion, product, furniture, lighting and print work. The exhibition runs from 27 September until 4 January 2004.

On 25 September, SCP’s flagship store in Shoreditch will host England v Germany, an exhibition of contemporary product design. England v Germany will showcase products, old and new, exploring the movement of people and ideas between the two countries. The show will include work by English names such as Matthew Hilton, Jasper Morrison, Michael Marriott and Michael Young, alongside the work of German designers such as Dieter Rams, Konstantin Grcic, Gitta Gschwendtner and Rainer Spehl. SCP will also present its Autumn/ Winter Collection 2003 in a series of room sets in its 4th floor concession in Selfridges on London’s Oxford Street.

An exhibition of work by Finnish textile designer Ritva Puotila, founder of Woodnotes.

Vessel will be showing new glass and ceramic work from the maverick Dutch designer Marcel Wanders in a special preview from 1-31 October.

For a full programme of events select the 100% Guaranteed section of www.100percent design.co.uk and