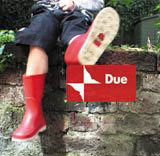 Why Not Associates has rebranded Italian state television supplier Rai’s three channels as the corporation seeks to raise its identity in face of growing competition. The work will be broadcast from this Sunday.

Italian television has become more competitive this year, with the launch of Rupert Murdoch’s Sky Italia on 14 May (DW 1 May) competing with the domestic commercial channels, largely owned by Italian prime minister Silvio Berlusconi, and the state-owned Rai.

Why Not was appointed by Italian corporate identity and branding specialist Area on the strength of previous channel identity work for clients such as the BBC.

But on the strength of three of Why Not’s proposals, he decided to use them across all three channels, Cilento adds. ‘We were keen to work with [consultancies] abroad to gain an outside perspective on what we were doing,’ he says. ‘The brief was to give a more dynamic image to Rai.’

‘The channels have distinct personalities and we had to differentiate between them,’ says Why Not partner David Ellis.