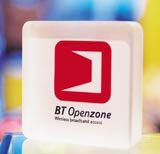 SAS has created an identity for BT’s Openzone service, which is to be rolled out to 4000 sites across the UK as the telecoms giant commits to expanding the reach of its wireless Internet service.

BT has signed contracts with retailers such as Costa Coffee and hotel operators Hilton, Jarvis and Thistle to provide wireless Internet connectivity to corporate customers with laptops and personal digital assistants. Following a successful trial, the service is now expanding to cover 400 sites by June 2003 and 4000 by 2005.

SAS has created signage, point-of-sale material, welcome packs, marketing literature and sales collateral for the project, in addition to the visual identity.

The scheme is among the first in a range of BT products to feature a distinct product ‘identifier’ alongside the company’s corporate logo.

‘We’re not trying to create another brand,’ says BT’s head of marketing communications for mobility Sandrine Desbarbieux. ‘But we needed a product differentiator for signage purposes.’

‘It had to be adaptable, as it will be going into quite diverse locations, from five-star hotels to motorway service stations,’ he explains.

The identity will stand alone on site, but will sit alongside the BT logo on marketing literature.

SAS, which was appointed on the back of previous work it has completed for BT, also hopes to create jointly branded materials for BT and the venues involved.