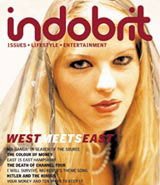 Fledgling graphic design duo Valle Walkley has this week finished concepts for Indobrit, a nascent magazine claiming to be the first in the market to target second and third generation British Asians.

Indobrit, which will be available in WH Smith, is aimed at 20to 45-year-old Brits and British Asians. It will feature a mix of lifestyle spreads, sport, travel features, film and book reviews, recipes, poems and political articles. Contributors include writer Arundhati Roy.

According to Indobrit editor Farah Damji, the magazine will sit between Wallpaper and ID magazine on the newsstands.

Valle Walkley is creating the style, layout and graphic identity of the magazine, which is set to be around 148 pages. The magazine is smaller than a standard magazine and similar in size to Conde Nast’s Glamour. The design is ‘young and fresh, but understated and classical,’ says Valle Walkley founder Daniella Valle.

Daniella Valle and Richard Walkley graduated from the Royal College of Art’s communication art and design course in July, and set up Valle Walkley shortly after.

The two got involved in Indobrit, which launches on 20 January, after being approached by Damji. She contacted 15 designers for a pitch as she was unhappy with the original, unnamed graphic designers on the job.