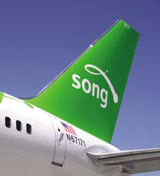 How times have changed in the airline industry. Not so long ago, the great national carriers were all-powerful. Then along came some cheeky pretenders, undermining and under-cutting as they went.

The likes of EasyJet and Ryanair had it their own way for a bit, but were soon taken on at their own game as the big players – realising they couldn’t beat the budget upstarts – joined them, with Go and Bmibaby.

These offspring have the advantage of a trustworthy brand and – crucially – slots at major airports. As a consequence, the low-cost airline market is no longer just about cost. Issues of convenience and loyalty are also playing a part. So now the no-frills people who put this sector on the map are having to rethink their game.

This short history has been repeating itself in recent times around Europe and in the US. The proliferation of budget airlines on both sides of the Atlantic has been mind-boggling, and is also a reaction to the airline industry’s downturn since 11 September 2001.

New, smartly branded entrants range from United Airlines’ Ted, created by Pentagram, which launched this month, Song from Delta by Landor Associates, which took to the skies in January 2003, and Wizz – just completed by FutureBrand – which launches in the UK this spring. These brands are rubbing shoulders with Hop, based in Cambridge, Air Luxor Lite from Portugal, Basiq Air and Vbird in The Netherlands, DBA, formerly Deutsche BA, Air Malta’s Fare4U, Iceland Express and Bratislava-based SkyEurope, to name a few.

Some of these are hoping to take advantage of the expansion of the European Union, when 70 million potential flyers will join the EU. In fact, Wizz plans to take off on the day of accession, 1 May.

But with such a proliferation of businesses, all with a similar offer, where does brand differentiation come from? According to the branding groups, it comes from service and attitude. As Chris Nurko, FutureBrand director of global innovation says: ‘Either it does what it says on the tin, or you do quality with attitude. You have to choose one end of the spectrum.’ Wizz, which will have an on-line-only booking service, will aim to serve up style and a low-cost price tag.

When no-frills first came to town, there were two positions: the studiedly unbranded stance of EasyJet and the genuinely unbranded Ryanair. Both worked because they rarely competed head-to-head on routes.

But as the marketplace became more crowded, with Buzz – by The Partners and ad agency WCRS – Go and Bmibaby, these original positionings seemed increasingly crude. ‘Ryanair, EasyJet and South West Airlines in the US show that price can get you in on the game, but then you need differentiation,’ Nurko explains.

‘EasyJet goes to great lengths not to appear like a brand-led business,’ says Robert Jones, head of consulting at Wolff Olins. He contrasts this with Go, branded by Wolff Olins, and sold by BA to EasyJet. The idea behind Go was to appeal to people who think it’s cool to be sensible about costs regardless of how well-off they are. ‘With Go we said low cost does not have to mean low service. In the longer term, it was a stronger brand than EasyJet,’ adds Jones.

But then Go, like the UK’s Bmibaby, Ted and Song in the US, has the advantage of a strong parent brand. ‘The parent brand gives them back-up and power,’ says Peter Knapp, executive creative director of Landor Associates, ‘And gives them slots at the big airports.’

Such brands are happy to benefit from the strength of the master brand, to get them off the ground.

‘Go was not overtly BA, but there was a strapline [using BA] for the first few months,’ says Jones. ‘With Go it was important that its personality was very different from BA, the line was to give customers reassurance.’

And so too with Song, whose website homepage reads, ‘Song is operated by Delta Airlines’. Landor’s mission was to create a brand that would differentiate itself from competitors such as SouthWest and JetBlue, and also avoid confusion with the parent brand. Conversely, the Bmibaby brand is much more closely aligned with its parent, and is intended to deliver price with attitude.

These low-cost spin-offs from mainline airlines have put pressure back on the new independent aggressors, and created a situation that is a complete turnaround from just 18 months ago. For low-cost brands can no longer trade on price alone. Service, convenience and image, the sub-brands have proved, do count for something.

As Knapp says: ‘The race is on for a low-cost airline with a proposition that is not just about price, but also about preference and loyalty. It’s about adding value to the experience without damaging the commercial equations.’

Spend little or no money on design and there’s a good chance that the airline will end up looking cheap and nasty, which is hardly a positioning worth shouting about.

On the other hand, a fancy name and good graphics will not achieve this alone. ‘There are a lot of whizzy names, but do they have the staying power?’ asks Jones.

Europe and the US must have more airlines than ever before, though it’s unlikely that all these carriers will still be around this time next year. For as Nurko at FutureBrand puts it: ‘Europe doesn’t need another airline, but Europeans [do] need better travel.’

The young ones of the skies

Epitype rings the changes for LCC