Manchester consultancy Reform Creative has designed the Annual Report and Accounts for Shisha, an international agency for Asian arts and crafts. (pictured)

Crush Design & Art Direction has created invitations for the Arts Foundation Awards – to be held at Pentagram’s London office on 26 January – designed by Chris Pelling and Helen Crawford White. 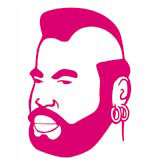 The Dutch Post Office has unveiled a postage stamp, by UK architect Fat, featuring its bicycle surveillance hut – the curiosity is sited on the beach front at Scheveningen, near The Hague.

Zip has designed the logo and promotional material for the Folk Britannia weekend festival, which commences on 2 February at the Barbican centre in London. All illustrations are by Chrissie Abbot.

The A-Team is back, in the form of a limited edition tea towel, designed by Very Studio. The towel, depicting a graphic representation of Mr T, was shown at Top Drawer Spring, a giftware, fashion and accessories trade fair, held this week at Earls Court in London.