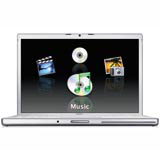 A Steve Jobs keynote address is a major event in the Apple Computer enthusiast’s calendar. For weeks beforehand, the Internet is filled with speculation and rumour as to what Apple is going to do next. However, after last Tuesday’s keynote, there was a definite sense of anticlimax.

It wasn’t really to do with the products Jobs announced. The iLife software upgrade gathered rave reviews, while Apple’s first Intel-powered products offer substantial increases in speed and performance. It wasn’t even that the new iMac and MacBook (pictured) (the long awaited PowerBook replacement) essentially look the same as the products they replace (despite minor innovations such as a magnetic plug), leaving us to assume – and hope – that new Jonathan Ive product designs will be revealed when Apple launches the full Intel product line-up later in the year. The disappointment was more due to what wasn’t there.

This year’s hot Apple rumour surrounds a Mac media centre. The next obvious step for Apple, building upon the success of the iPod, is to take its products out of the office, allowing the customer to access their digital content in their living room via a matching Apple flat-screen TV. This remains a rumour, but, according to insider sources quoted on the Cult of Mac blog, ‘some very cool products’ were missing from last week’s keynote because of supply issues with the Intel chips. Let the speculation begin!