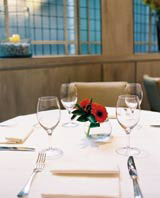 Just before a recent holiday to Rome I stumbled across the news of the opening of a David Collins-designed restaurant called Quirinale. Excited by the prospect of hip London style being exported to Rome, I tried to book the restaurant for an evening during my stay there. A series of misunderstandings were to follow. Eventually, I was told it was named Quirinale because it’s an Italian restaurant near the houses of Parliament in Westminster London, not Montecitorio, Rome. Intrigued, I decided to check it out.

Because of its location on Millbank I assumed it to be teeming with MPs and old school hacks gulping down pricey clarets between a vote or two. But on a visit on a Monday night, the 55-cover restaurant was pleasantly hushed and in tone with its gentrified surroundings. Indeed, the David Collins signature style is as always impeccable, with light cream leather banquets and limestone, a stained glass wall that diffuses the basement atmosphere and limed oak floors.

Small, important details like the handmade dark wood wine rack in the dining room allows the bottles to be on view for the diners, while in the slightly cramped bathrooms, there are a bespoke, natty shelves that act as towel holders. This is design to live in rather than to gape at – something that can be found consistently at the other restaurants Collins has turned his hand at, from Cecconi’s to Quo Vadis, Mirabelle, The Criterion, J Sheekys and, most recently, Locanda Locatelli. Each has its own personality, rather than that of the designer.

The well heeled clientele were out in force, but I also half expected some celebrity sightings – after all, Collins is the man known in gossip columns as Madonna’s new best friend (he recently escorted her to that quintessential British summer fixture, the Chelsea Flower Show). But no, Madge and Guy must have stayed at home that night.

Shame, since the food is excellent – head chef Stefano Savio rustling up a great master class in contemporary Italian cuisine.

I eat home-made casoncelli, fresh pasta parcels with cheese and truffles, followed by a baked fillet of sea bass stuffed with Genoese pesto (green beans and potatoes) with a perfectly condensed pesto puree. My companion chose the asparagus with poached egg as starter, and could not avoid also selecting the pasta, bewitched by the truffle scent. We topped it all off with a Sardinian Vermentino white by producer Sella & Mosca. Service was impeccable and friendly, and suave Italian maitre, Franco Bettini, managed to convince me to eat lots of fattening, scrumptious Piedmontese cheese.

With starters at about £9.50 and mains at about £14, prices are fairly reasonable, especially considering that the restaurant is patronised by some of the most well paid politicians in the country who can supposedly afford to splash out. But Quirinale is not ostentatious; rather it is a stylish, welcome haven for all those who yearn a pleasant evening away from the glare and noise of so many West End restaurants. It also finally puts good design and food on the map in an area like Westminster – which unlike its Roman counterpart – has always bemoaned the lack of decent establishments.