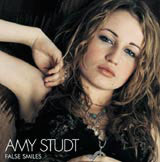 Polydor has commissioned Root to create the artwork for 16-year-old singer/songwriter Amy Studt’s debut album, False Smiles, which is due for release on 23 June. The consultancy has also designed a press and media book introducing Studt, and packaging and sleeve design for her debut singles, Just a Little Girl and Misfit. The album cover features images of the singer by photographer Corinne Day, combined with song lyrics and flower petal imagery to create a ‘tactile and poetic’ sleeve, says Root creative director Martin Root, who led the project. Studt is managed by pop impresario Simon Fuller.