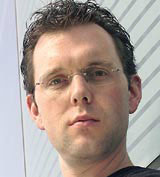 Exhibition design work could soon be up for grabs at Manchester’s Urbis museum, as its first creative director vows to work with more external design teams.

Scott Burnham, who joined last week, one year on from Urbis’ opening, has been appointed to ramp up the museum’s temporary exhibition programme and ‘move [it] away from its museum tag’ towards a ‘centre of urban culture’.

Burnham says he is ‘actively establishing a temporary exhibition schedule’ and has a second exhibition space now at his disposal. ‘I’d like to create exhibitions with an urban aesthetic in mind and interact better with Manchester’s creative industries,’ he says. He has planned a series of talks, kicking off with Manchester design hero Peter Saville.

Urbis’s next exhibition, Taxi!, is designed in-house, but Burnham says he intends to look externally for future shows.

Taxi!, which opens on 12 July, looks at all elements of urban taxi culture and will include taxi driver confessionals and video elements.