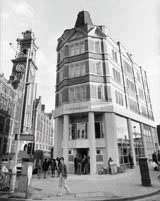 Cornerhouse, Manchester’s international centre for contemporary visual arts and film, is undertaking a major overhaul in design. This is the first time it has changed its identity, website, interiors and wayfinding system since it launched 20 years ago, Design Week can exclusively reveal.

The centre has commissioned a group of designers to carry out various projects scheduled for completion in October as part of plans to mark the organisation’s 20th anniversary.

Liverpool-based Nonconform has been appointed to redesign the existing identity, following a six-way paid pitch. Magnetic North, located in Manchester, is tasked with redesigning the organisation’s website and Idaho has been appointed to provide the Web engineering. Both consultancies were commissioned following discussions between ten design groups.

Holmes Wood has been appointed to undertake an internal and external wayfinding scheme to improve navigation across the entire site, which comprises: three floors of art galleries, three cinema screens, a bar, cafÃ© and bookshop.

Cornerhouse is also carrying out a substantial refurbishment scheme and will submit an application for Lottery funding this summer, says Cornerhouse director Dave Moutrey.

In the interim, an in-house design team will ‘upgrade the existing space’ and create a cleaner look, decorating and installing new furniture.

The projects are still being developed, but Moutrey has hinted at the future look of the organisation’s identity, explaining that its application will be ‘very different’ and will use more words, rather than employ a square logo.

Cornerhouse opened in 1985. Recent research shows its core audience has doubled within the past two years.

The debate did not just cover defensive strategies