When Design Week last spoke to Space10, it was to congratulate the team for having won the 2019 Design Week Social Design Award. Their winning project, SolarVille, had caught the attention of judges because of its design-led solution to a pressing socio-political issue: the fact one billion people living in rural and poverty-stricken areas around the world do not have access to electricity.

Attempting to link outlying areas to a country’s central grid can be cost- and labour-intensive and doesn’t guarantee people would be able to afford energy bills afterward. Instead, SolarVille relies on solar panels installed on half of the buildings in any given village. (Take-up of the scheme in the entire village is not realistic). These produce energy that can then be sold off automatically, according to need in the other half of the village using blockchain technology. This process is automated so there is no middle man company profiting.

By all accounts it’s been a busy year for the research and design lab, and when Design Week next catches up with the team – speaking to co-founder and communications director Simon Caspersen and lead creative producer Mikkel Christopher – they are enjoying early evening in Delhi.

For the last few months, Caspersen and Christopher have been part of the team bringing Space10 to India. It’s not the first time the organisation has popped up outside of its native Copenhagen – their work has previously been displayed in New York, London, Shanghai and Nairobi – but this has been a mission unlike anything Space10 has undertaken before.

Caspersen explains Space10 has made the move to Delhi “to learn”. Both Caspersen and Christopher say they take pride in not being experts, instead emphasising the need to collaborate and study with specialists and authorities around the world – a sort of innovation crowdsourcing, both on a global and hyper-local scale.

“For a research lab like us, where we are looking to tackle some of the biggest issues facing our world, we need to be looking at designing solutions in the context of the places they’re being the most felt,” says Caspersen.

Gathering expertise and critique in situ is at the core of the Space10 mission, the pair say. Being a prototype itself, even award-winning SolarVille isn’t exempt from analysis and review. For the last few months, the project has been on tour around the world.

“There’s no point working in a vacuum”

“It’s really about stress-testing our work,” says Christopher. “What are the limits and what needs changing? Whatever people say, it’s a valuable lesson.”

The pair recall their “unofficial” motto, the Mike Tyson quote: “Everybody has a plan until they get punched in the mouth.” For them, it is a reminder of the importance of bringing their work into public view early on, because getting too wrapped up in one plan can lead to failure.

Caspersen adds: “There’s no point us working in a vacuum for three years, pouring resources into making the perfect project.

“We use our prototypes as conversation starters, so that we can eventually use the collective creativity of the world.”

“All our projects are intertwined”

This approach means Space10 has a bigger and more diverse output than most research and design labs. In just the last two years, on top of opening a new branch of operations in Delhi and SolarVille, the team have launched their Urban Village project, updated the Ikea Place augmented reality app and published a cookbook.

“[Our projects] can seem very spread out and diffuse,” says Christopher, “but actually the challenges we’re facing in the world today can’t be solved by just one thing. It’s a lot of overlapping things that need many different solutions, so all our projects are intertwined.”

Indeed, it’s easy to see why they never feel their job is done: where SolarVille looks to connect communities to much-needed electricity, the Urban Village looks at how the physical design and building of those communities can be sustainable, affordable and accessible.

Ikea Place helps to give people a sense of home and comfort, bridging “the imagination gap” that can often leave living spaces feeling uncomfortable. And then the Future Food Today cookbook looks to solve very real food related issues that might be on our horizon, from creating sustainable comfort food classics, to encouraging readers to try and develop a taste for insects or algae. 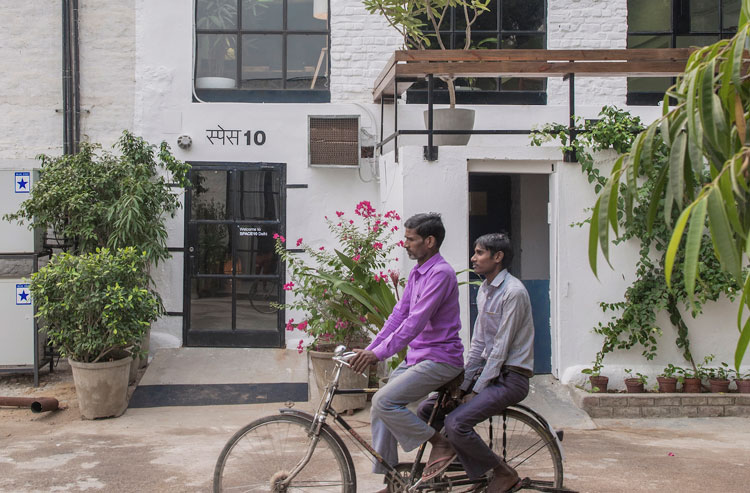 “A lot of misfits”

“Breaking down the siloes that exist today is one of the best things we do at Space10,” says Caspersen. “We can no longer just have bioengineers talking to bioengineers, architects with other architects or designers with other designers, everyone needs to be speaking together.”

Christopher echoes this. “We’re a lot of misfits when you get everyone in a room.

“We have some really good arguments and some really interesting lunch conversations – we’re misfits with strong opinions who want to change the world.”

With this propelling them, Space10 plans to stay in Delhi for the next six months, to further research and connect with local specialists and designers.

Caspersen ends: “Innovation isn’t a technical exercise, it’s a creative one and the input we’ll get here is wildly different to what we’d get in London or Copenhagen, so we will embrace it.”