Update [1/4/2020]: Following the coronavirus pandemic, Lewisham’s Borough of Culture status will now come into play in 2022.

“If you want to know what Borough of Culture status can do to an area, look at Waltham Forest,” Lewisham Mayor Damien Egan tells Design Week. “It had impact across every single service level of the council, brought in investment, and the borough started to recruit better candidates for jobs. And it went on to win council of the year.”

The Borough of Culture is a year-long initiative that has run annually since 2019. London boroughs submit bids in the hope of receiving over £1m in funding. That money is then used to deliver a “programme of ambitious cultural activities celebrating the unique character of local people and places, and to develop a plan to make culture an integral part of the borough’s future,” according to the Greater London Authority, which distributes the funds.

As part of its year-long showcase Waltham Forest put on Ways of Seeing, which transformed the northeast London borough into an art exhibition with 68 pieces of art across its urban areas, waterways and forest. There were also plays, art festivals, and workshops in the varied line-up. 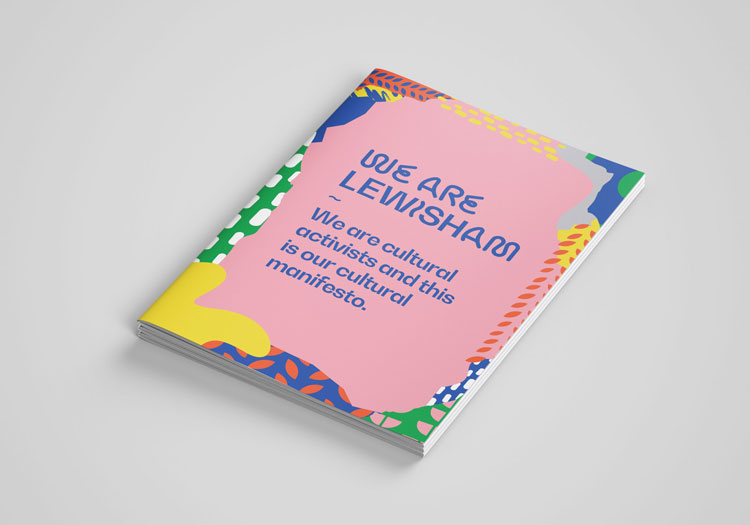 A bid to win Borough of Culture takes planning; Lewisham council has been working on it since March 2019. A key part of the campaign is the visual identity, which was designed by Jamie Paton, in collaboration with a local design studio, Studio Raw. The identity is colourful, with a focus on a “millennial pink” and dark blue, with a secondary palette of orange, yellow and green. The main typeface is BW Gradual, while the typeface Zig Zag is also used for variety.

“The colour palette reflects Lewisham’s vibrant culture clash,” says Paton: “Having lived and worked there I knew that conventional colours just wouldn’t reflect the diversity or the atmosphere.” 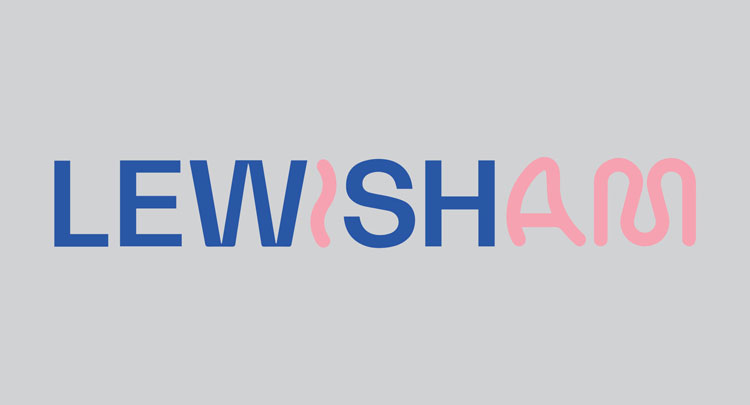 It spans poster campaigns, booklets, as well as digital platforms. “The overall brand had to feel like it came from the community, expressed by a collage of ‘home-made’ patterns, overlaid graphics, and spontaneous-feeling illustrations,” Paton adds.

The central part of the branding focuses on ‘I AM’, taken from the borough’s name. “Sometimes the answer is staring you in the face,” Paton says. “As the brand is about empowering both the individual, and the whole borough, it made perfect sense to go with the simple, direct approach of using the I AM from Lewisham. It’s a proud shout-out that everyone got behind very quickly.”

“A sense of pride” 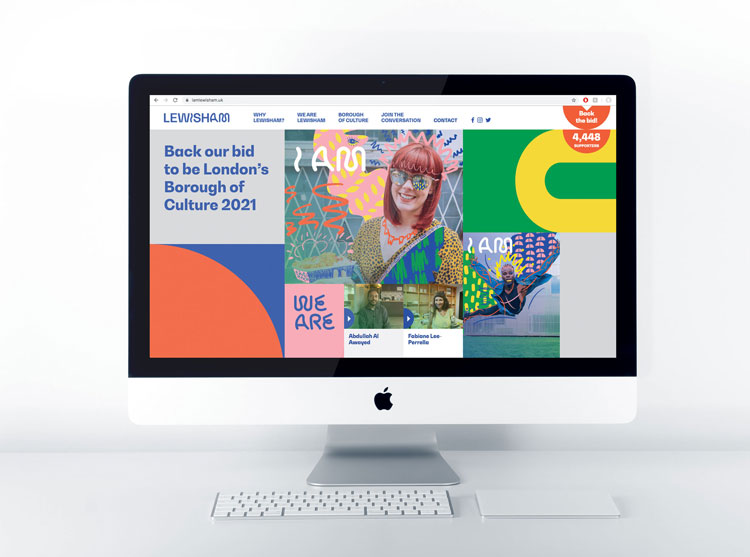 Studio Raw’s creative director, Rebecca Molina says that with the brand identity, the studio aimed to show “a sense of pride” in Lewisham.

The Deptford-based studio was also behind delivering the brand and marketing strategy for the borough winning the Creative Enterprise Zone in 2019 (along with six other boroughs). This scheme, the first of its kind in London, promotes local jobs and increases affordable workspaces. The result of the work was SHAPESLewisham, an initiative that showcases the “diverse creative projects, practitioners and businesses in the area”. On its website, you can search local businesses by sector (Design & Architecture, Arts & Entertainment, Exhibition), interests (Future, Sociology, Ethics) or simply an adjective (Abstract, Empowering, Surprising). That open-ended search facility should give some indication to the breadth of what’s on offer in Lewisham.

While the Borough of Culture and Creative Enterprise Zone wins are recent, the creative community has not come out of nowhere. Studio Raw’s been based in Deptford since 2001; and Molina says she has worked on networking events to join the creative community in Lewisham, which is particularly strong in Deptford, she says. In 2008, for example, the studio created the Deptford Project, a restored 1960s 57-seater train carriage which ran as an independent business. (Morag Myerscough created the visual identity for the project).

These headline-grabbing events and campaigns create a vital “visibility” for the area, Molina says. But what else attracts creatives to Lewisham? Cheaper rents mean there’s more value for money, especially when you compare it with central and east London. There’s plenty of outdoors inspiration (more than a fifth of the borough is green space); the Horniman Gardens, Chinbrook Meadows and Hilly Fields. And there are a number of art schools in the area, including Goldsmiths, and the campaign drew on its student-rich population and their potential. 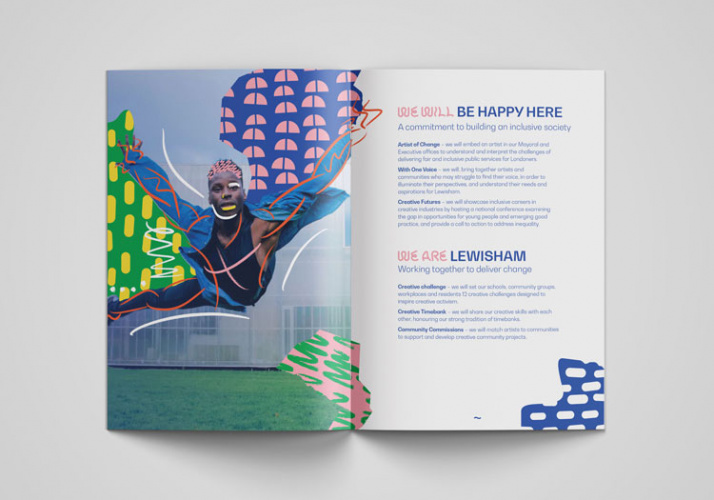 It’s also diverse. Some 46% of residents are from black and minority ethnic backgrounds (BAME). Among children, this figures rises to 76%. Keeping that diversity is a priority, and Damien Egan hopes that the Borough of Culture roll-out can be part of that.

As part of the Borough of Culture bid, Egan says that the council will go to every secondary school and talk to student groups (from the age of year 7 up) and discuss jobs that are available in the arts and creative industries. It’s a question of letting children know what’s available — not just the obvious choices, but also “the production, direction, design” side of the industry. Egan says: “How do we make sure that anyone, regardless of their background, begin to think that those opportunities are available to them?”

The problem is that while 76% of school children might be from BAME background and the borough has a flourishing creative scene, there is another uncomfortable truth in existence. “Within the arts and design,” Egan says, those young people “are going to rooms that are majority white”.

A co-founder of local design studio IYA, Matt Cottis tells Design Week that the majority of the CVs he sees are from very similar backgrounds. This issue is not specific to Lewisham, of course; a 2018 Design Council report showed that only 12% of design managers and business owners are from a BAME background. Cottis says that as part of the Borough of Culture, he would be interested in hiring an intern to introduce underrepresented people to an industry that they might not previously have thought themselves a possible part of.

Fostering local networks is important, according to Cottis. When the studio relocated to Lewisham from central London three years ago, it created a poster series for Midi Music Company, a charity that develops music education and talent among children and young people.

Can a Borough of Culture bid diversify creative communities?

Lewisham council recently bought Catford Shopping Centre and has begun to redevelop it. There’s an independent cinema, a vegan restaurant and a yoga business, Egan says. While that may sound like many other up-and-coming areas of London, what’s different according to Egan is that the majority are black-owned and local businesses. “When we are opening a yoga or an arts studio”, he says, “residents should be able to see themselves, or their children, being able to have that opportunity.”

Egan’s focus is to “talk about affordable business and retail space”. While it’s good to talk about affordable housing — and there’s been a “big jump” in affordable homes, according to the mayor — affordable business rents are vital, too. “As soon as you get chains moving in, they can outdo everybody,” Egan says, “they can increase rents across a high street. It doesn’t take long for it to happen and for independents to move out. And then you have what are sterile high streets, in my opinion.”

In the coming year, the council is launching a borough-wide census of every high street to record the number of independent shops there are — the council will try to keep that percentage as high as possible. A draft plan takes the census to 2040. The mayor wants a fully serviceable borough where “people can live, walk to work, and in the evening explore another area”.

In the immediate future, Egan says that the Borough of Culture status will be multi-faceted and involved conversation with the borough’s grass-roots campaigns.

One of those is Deptford X, which is London’s longest running contemporary visual arts festival. It’s artist-led, annual and based in Lewisham’s Deptford. (IYA created the poster design for 2018’s festival.) Last year’s Fringe section of the festival had the theme ‘Stop Making Sense’ which resulted in a series of “whimsical, playful and unruly projects”, according to its organisers. The parade section of the event works with local community groups, schools and youth clubs.

The council will also be developing a pop-up art space, where issues of migration and environmentalism will be discussed — the primary focus though is on people’s enjoyment. Migration will be a relevant issue for the borough; in the next year Lewisham is welcoming 100 families from Iraq and Syria. “There will be different views on that,” Egan admits.

Going forwards, beyond 2021, the focus will be on working together. Egan says: “I think the challenge, as with London, is how the council and the creative industry work together? You really need to put actions in place to make sure you’re protecting those industries.”

There’s also an economic case to be made for this push; the creative industries contribute over £100 billion to the UK annually.  “It’s one of the biggest sectors, and while often people just think it’s a nice thing to do, there’s a huge economic case to be made,” Egan says. “In a post-Brexit world, it’s about making sure those skills are available to Lewisham residents.”

How to get in with the in(terior design) crowd