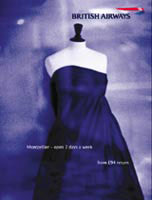 GB Airways has awarded its design and marketing account, believed to be worth a six-figure fee over the next 12 months, to London-based consultancy, 3Fish in a Tree.

The consultancy, which this week presents first concepts, will handle internal communications, trade and consumer direct mail and international press advertising for the airline.

The work has been prompted by a combination of market needs and a desire for a greater focus on design, says GB Airways head of marketing Jenny Ruler.

‘Post-11 September 2001 we needed to ramp up our communications programme. We also compete with the no frills airlines on our routes and we wanted to highlight our offer in a more stylistic way. In the past design was the last thing that got looked at,’ she says.

‘[The work] has to follow the BA guidelines, but we have been focused on pushing that as far as possible to get a cleaner, more design-led look and feel,’ Oh says.

‘We approached all the pieces from a design perspective and looked at typography, use of white space and use of images,’ he adds.

Oh says GB Airways, which is a BA franchise partner, also wanted the work to raise its profile within the BA group.

‘The work has to bolster its relationship with BA and achieve marketing goals,’ he says.

The win is 3Fish’s biggest to date and was awarded following a series of test projects for GB Airways earlier this year.

The consultancy beat three ad agencies to get the business and will also pitch for GB Airways’ UK advertising work later this year.

Releasing information to credit where credit is due