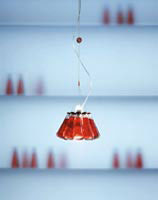 In scientific terms, we may not be sure exactly what colour is, and among psychologists, there is yet no consensus on how different colours affect our moods and emotions. But one thing is certain, on the evidence of the Frankfurt Light & Building exhibition, colour in interior lighting is an unstoppable trend.

The main reason for this trend is the rapid explosion in coloured lighting technologies and their increased reliability – from dichroic filters to fibre optics to fluorescent lamps. Most importantly, perhaps, there’s the rapid development of the light emitting diode, which is being touted as the major light source of the 21st century.

Coloured light for interiors came in all shapes and sizes at Frankfurt. Fancy gracing your living room or reception area with a series of internally illuminated coloured hillocks? Then you can, with the Blob system from Foscarini, designed by Karim Rashid. Or do you prefer an indoor/ outdoor light wand, with more than a touch of Star Wars about it? Then go for the Rosaverde fitting from Luceplan, incorporating fluorescent tube. Designed by Eduard Francois, Rosaverde provides a white, pink or green effect, simply by twisting the outer glass filter. More DIY coloured effects arrived in the form of the 9Lite by Interactive Licht, which comprises a back-lit board on which are arranged eight coloured acrylic panels plus a white ‘blank’. These can be rearranged within the frame, rather like the old kids’ word game, to offer different illuminated colour patterns – a sort of do-it-yourself Mondrian kit with lights.

Of course, Ingo Maurer, who also had a superb retrospective exhibition at Frankfurt’s design museum, has always been into intense colour and the re-cycling of found objects. Both themes come together in one of his company’s wittiest offerings this year, the Campari suspension light – a number of small Campari bottles full of red liquid, arranged around a concealed light source. An instant bar classic, perhaps?

While all these light fittings are strictly for the leisure or even residential market, colour is also invading the workplace. Several companies showed fluorescent suspension systems incorporating coloured effects of various types. Se’lux, for example, introduced the ‘RGB’ pendant luminaire, where a conventional white downlight is supplemented with red, green and blue fluorescent tubes above, which can be digitally switched and dimmed to provide an atmospheric colour wash to the ceiling.

And static colour effects on suspended fluorescents, created with tinted side-panels, are becoming even more common, the Level Plexy Blue fitting from Deltalight and the Airline luminaire from Nimbus being the best examples.

While all these fittings use tried-and-tested colour filtration technologies, the colour technology of the moment is undoubtedly the LED. This compact, solid state, robust, low-energy source, offering a 100 000-hour life, looks set to revolutionise the lighting industry. Although light output is still rather low, it is growing rapidly.

In fact, the most exciting new offering at the show was undoubtedly the launch of the High Output five-watt Luxeon LED from Lumileds, a partner of Philips, which has a light output per watt comparable to a low voltage dichroic lamp. Philips was showing a prototype linear wall-washer using a row of these new larger LEDs and their throw and intensity was impressive.

Half the companies at Frankfurt were showing at least one LED-based product, with the LED ground-marker light winning this year’s over-worked clichÃ© award by a street. One of the most impressive new offerings is the iColor Accent fitting from Color Kinetics, which uses DMX-programmable LEDs within a cylindrical diffuser to create a linear colour-change fitting in 300mm, 1200mm and 2400mm lengths, suitable for architectural uses of all kinds.

Both Zumtobel Staff and Ansorg took LEDs on board in a more or less serious fashion, Zumtobel Staff with the Phaos wall panels and the smaller Ledos ‘light point’, which both use RGB LEDs to offer colour change effects within walls and other surfaces. Ansorg Lighting also had a couple of LED-based offerings: the Lumis wall-recessed unit, in square or circular shapes and the Cube colour change display unit. And following the introduction of last year’s LED-based Kaio tasklight, designed by Ernesto Gismondi, Artemide followed up with a second version using another innovative light source, the diminutive Mini-Lynx fluorescent lamp from Sylvania.

n more unconventional uses of LEDs. Crescent Lighting has introduced an off-the-shelf mini-fibre optic system for small-scale applications, in which each fibre length is powered by a single LED. And a company called Emdelight has even developed a range of internally illuminated furniture, such as desks, screens and cabinets, using LEDs to edge-light the component acrylic sheets. It is a rather dramatic system that could become popular in low-light environments such as clubs and bars.

Just to prove that Frankfurt wasn’t totally drenched in colour, I have also picked out some of the more unusual, white light products on show, for example the rather sinuously formed Pipe ceilingor floor-mounted fitting from Artemide, designed by Herzog & de Meuron. Another Italian giant, iGuzzini, had probably the largest number of new products at Frankfurt, including a new Compact version of the Sivra ceiling system.

Finally, two playful new products were on display: the minimal, but allusive, On the Rocks model by Flos, effectively a wall-mounted brick-light designed by Antonio Citterio, and Deltalight’s delightful wheeled spotlight, called Go Car. Have light, will travel.