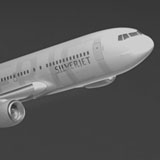 Low-cost long-haul air carrier Silverjet has revealed its visual identity and aircraft livery, designed by Strategic Fusion and the airline’s in-house team. It comes ahead of a full roll-out across seating, cabin interiors, entertainment, in-flight magazine, menus and an exclusive passenger lounge.

Strategic Fusion is putting the final touches to the livery, while French seat manufacturer Sicma is working with Silverjet to produce fully reclining flat beds. The airline is to refit its three Boeing 767 aircraft, which normally hold up to 300 seats, to accommodate just over 100 passengers.

According to Silverjet’s launch director Katherine Gershon, design will play a crucial role in creating the overall experience and will help the airline achieve its aim of ‘redefining long-haul air travel’. It is building a dedicated lounge at Luton Airport, with designs by Area Squared and Silverjet head of brand Angela Harding.

The logo and livery are based on a palette of grey and silver, chosen for ‘elegance and conservatism’, while a purple accent gives standout. The typeface, using capital letters, is an intentional visual shift from the brashness of the short-haul budget airlines, according to IT director George Henderson. ‘The phrase “low-cost” is important in that we are not a budget airline. We’re absolutely not the transatlantic Ryanair or Easyjet,’ he says.

Strategic Fusion’s visual brand language will be carried across all consumer touch points. The group collaborated with Prospect, which designed the airline’s website (www.flysilverjet.com), to ensure brand consistency. The Silverjet brand has been in development for three years, with initial positioning and strategy by Promise (DW 20 April). The company’s customer experience director, Martyn Bridger, was formerly head of in-flight service at British Airways.