PriestmanGoode has designed the identity — including logo and brand strategy — and interiors for an India-based co-living community, Olive.

Olive’s communities will open in Bangalore, Chennai and Pune in 2020; these three locations will provide 20,000 beds in total.

It is aimed at the millennial market — people born between 1981—1996 — who make up 34% of India’s population, according to PriestmanGoode.

Aditya Virwani, co-founder of Olive and COO of its parent company Embassy, says: “The shared economy concept has percolated all aspects of society, creating unprecedented disruptions as well as opportunities.”

PriestmanGoode was involved with the development of the brand identity, from the company’s name to logo and digital touchpoints.

The focus was on “openness” as well as taking inspiration from “Indian visual and cultural heritage,” according to Anthony Morgan, PriestmanGoode’s head of brand.

The name Olive is based on a combination of “open-living”. This combines two themes: a reference to the fact that the community is open 24 hours a day and also that it is “inclusive”.

The name was also chosen as it can “work internationally”; Embassy hopes to expand the chain outside of India in the future. 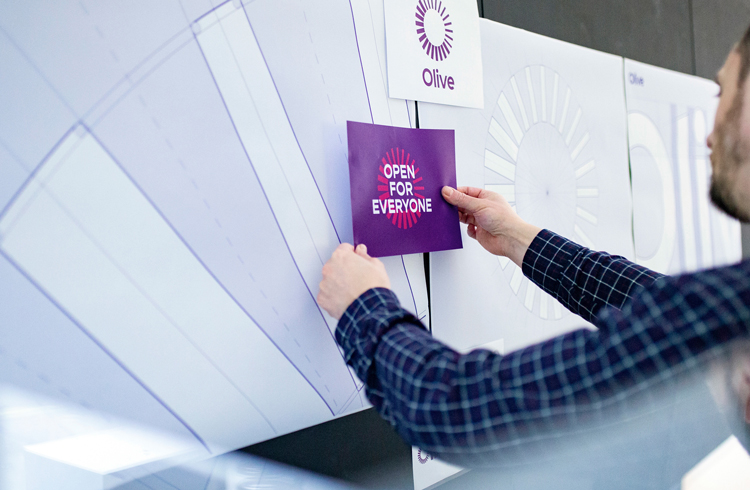 The logo is made up of a circle, comprising 24 bars which is a reference to the 24 spokes of the Ashoka Chakra, as depicted on the Indian flag. The bars are another reminder that Olive is open throughout the day.

It will also be developed as a digital clock, which will appear on apps and screens at the community’s open spaces. 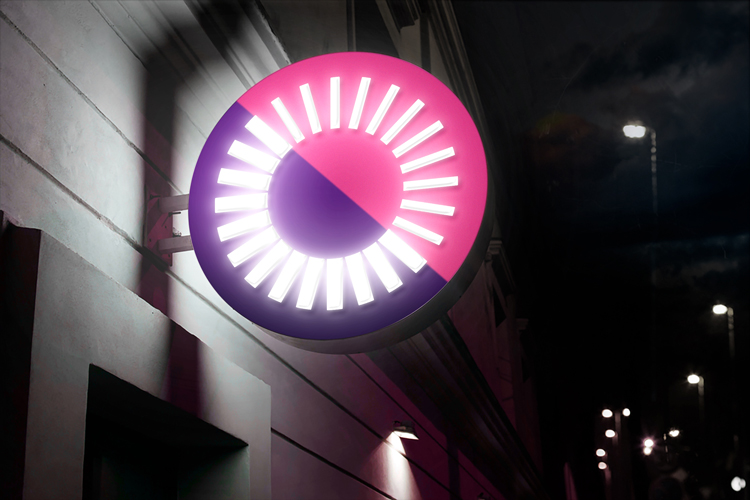 PriestmanGoode says that the logo is “dynamic, full of movement and reflects Olive’s ambition to be continuously evolving”.

The main brand colours are amethyst purple and fuchsia pink. These have been inspired by the “rich and vibrant colours associated with India culture” like in the country’s textiles and the Holi festival, an annual Hindu festival which signifies the arrival of spring.

The pink also represents day (sunrise) and the purple night (sunset) — another reminder of the community’s all-day outlook.

PriestmanGoode has designed a range of common spaces as well as the interiors for the rooms “to encourage a sense of community and increase social interaction between members”.

The properties will have a range of amenities such as wellness centres, cinemas, and chill out areas. Shared areas will be a focus, from co-working areas to shared kitchen while there will also be amenities for household necessities like laundry and convenience stores.

The bedroom themselves will vary. There are double rooms for two people with either a small living area or private work space. ‘The Suite’ is aimed at single occupants or couples and features a double bed and a lounge area. Finally, ‘The Mezannine’ is more like a small apartment with a lounge area, kitchen and bedroom on a mezzanine.

All rooms feature a private bathroom with shower.

In contrast to the brand identity, a pairing of blues and greens has been chosen as a reflection of Indian city life, according to the design studio.

The interiors will also be inspired from traditional Indian materials, PriestmanGoode says, including wood, rattan, tiles and a “minimalist concrete aesthetic”.Greenery is also been used in common spaces to “enhance a sense of wellbeing”.

The rise of a “sharing economy”

In Bangalore, there will be 15,000 beds and 2,500 each in Chennai and Pune. Olive’s Virwani says: “Today it is not just the scarcity of spaces or living in congestion that are driving co-living but also the affordability and flexibility.”

He points to the demands of India’s cities; there are over 26 million students in higher education across the country, as well as a rising migrant millennial workforce.

The community spaces will open in 2020.