A collective of musicians, designers, artists, authors and comedians including Bon Iver and Shepard Fairey have teamed up to create a musical compilation in aid of sexual health charity Planned Parenthood.

The 7-Inches for Planned Parenthood fundraising campaign is the brainchild of Matt Berninger from rock band The National, and has been launched as a result of a potential threat to the US-based charity’s federal funding.

Planned Parenthood currently provides affordable reproductive healthcare including sexually transmitted disease (STD) testing and treatment, birth control and cancer screenings for women, men and teenagers across the US. However, millions of people could lose access to its services as a result of proposed cuts to its funding by Republican lawmakers in the country, according to the charity.

“Lawmakers with extreme views are working hard to shut down Planned Parenthood,” says the 7-Inches Collective. “7-Inches for Planned Parenthood is a response to this threat. This curated series of 7-inch vinyl records is being made by a group of people who believe that access to health care is a public good that should be fiercely protected.”

Musicians including Björk, John Legend and Feist, and authors such as Margaret Atwood have donated new works to the campaign, which have been compiled together as a limited-edition vinyl boxset designed by London-based consultancy Sunshine.

The design of the 33-track boxset is based on Sunshine’s visual identity for the campaign, and aims to evoke “the rich history of 7-inch vinyl records as a medium for protest music and resistance”, says the collective. It sees an oversized “7” symbol set against a simple white background, and incorporates Planned Parenthood’s brand colour of bright pink.

“We all kept coming back to a design language that felt simple and minimal,” says Sunshine head of art and creative director of the project, Simon Holmes. “It drew inspiration from the colours of the charity, but in a way that felt ownable for 7-Inches for Planned Parenthood.”

Each of the vinyl records in the boxset also appear in pink, and come with an accompanying album artwork designed by various designers and artists, including Shepard Fairey, Domonique Echeverria, Hisham Akira Bharoocha and Rashid Johnson.

The boxset costs $100 (£75), with 100% of the proceeds going to Planned Parenthood. For more information on the campaign and to buy the boxset, head here. 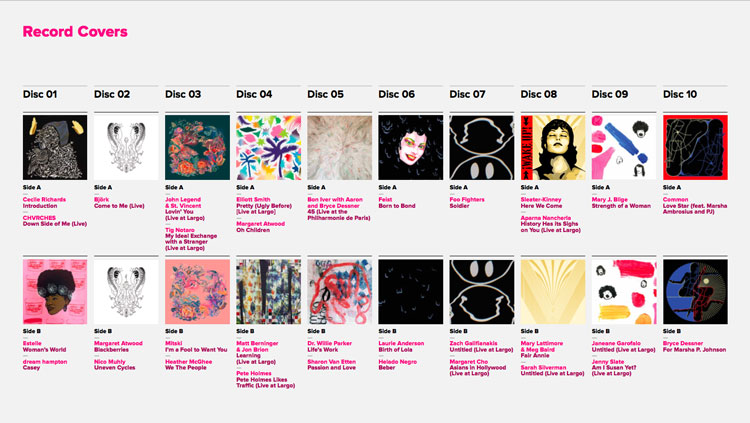