Ikea and Danish design lab Space 10 have unveiled the latest experiments on their collaborate platform Everyday Experiments, which aim to “take us beyond the home without leaving it”.

Now in its second year, the platform – which collaborates with designers around the world – has been given a new impetus thanks to global lockdowns, according to Space10 lead design producer Georgina McDonald.

“Last year, home had to meet a myriad of needs and expectations,” she says. “With this in mind, we played with the idea of how we can go someplace far away from the rooms we are in by changing the space of our home through technology.”

The conceptual projects seek to reimagine familiar spaces through AI, sound design and more, building on last year’s set of projects which included an AR elephant.

“What if a flower could help you understand your feelings?”

Australia’s Pitch Studios has proposed Forever Meadow, a “meditative walking application” which creates an “endless garden” in people’s homes. Using AR, the tool allows people to walk through their homes, with their footsteps triggering virtual flora. According to Space10, the project combines meditative walking (a calming practice) and people’s desire to be closer to the natural world. “The beautiful and calming space it creates would rejuvenate the home into a new sanctuary to explore,” Space10 says. “It wouldn’t only be people who activate the experience, but the space itself would become a character that determines the virtual content variables.”

AI specialists Osk have contributed another flower-themed concept for the platform. Mood Blossom uses AI to create “responsive floral avatars” that aim to reflect people’s wellbeing. Through an interactive experience and a series of prompts, the app would use a generative adversarial network (a machine learning model) to craft a personalised flower. “The concept of wellbeing can sometimes feel vague or difficult to visualise, with the quantification of our health often having a negative rather than a positive impact,” Space10 explains. “What if a flower could help you understand your feelings?”

Using sound to manipulate inside spaces

Pentagram’s Yuri Suzuki and his team have turned their attention to sound design, and its potential to transform the scale of inside spaces. Convolution reverb has been used as a technique in audio production for several decades, according to the team, and “creates an audio snapshot of a real space (an impulse response) that can then be used to recreate the space virtually”. The team worked to apply this to a domestic setting, proposing a system that would allow people to scan their rooms visually via an app, then connect to Internet of Things speakers where noises can be outputted. The user could then change the shape through the app and “hear the change in room dimensions sonically”, the team says.

Two real-world spaces were included in the audio prototype for Convolution Reverb: St Paul’s Cathedral and the Colosseum. The former was chosen for its unique reverb quality, according to the designers, while its famed Whispering Gallery “allows an echoing reverberation that travels around and disperses through the architecture”. “In a post-Covid-19 reality, we find ourselves more confined to our homes than ever before,” the team says. “This tests the limitations of what a home can be.”

The home as a playground 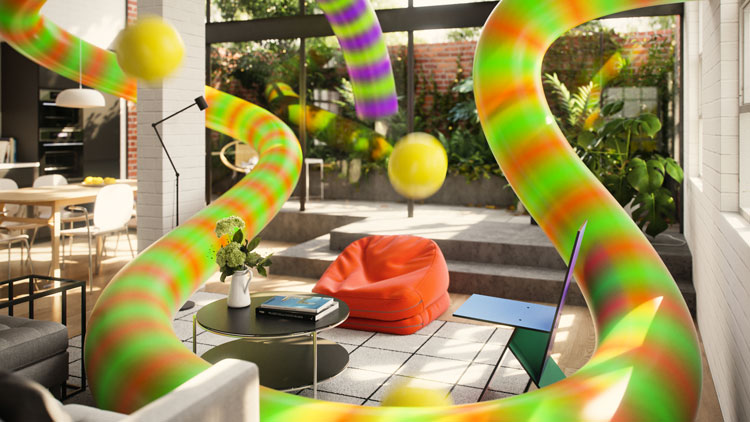 While many of us associate domestic spaces with relaxation, Kaleidoscopic Home aims to provide a “playful mode of living” by creating homegrown playgrounds. Thought up by creative director duo Tin Nguyen & Edward Cutting (known as Tin & Ed), the AR app uses object recognition to create surreal shapes from the surfaces of furniture, walls and ceilings. “This idea envisions a new kind of harmony within the home, a balance between order and chaos, relaxation and stimulation,” Nguyen says.

These interactions could benefit people’s physical and mental health, according to the designers. There would be increased activity as people navigate their reimaging settings, while improved motor skills could decrease blood pressure, they believe. As a potential avenue for exploration, the app could track health data such as daily step account of sleep cycles – which could then inform personalised virtual playgrounds for specific health needs.

To view all the projects, you can visit the Everyday Experiments website.