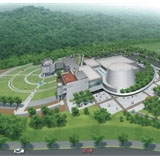 London consultancy Johnson Banks has been appointed by a consortium of designers and architects to work on a major development and relocation of the Sendai Astronomical Observatory in Japan.

The consultancy was approached by Japanese exhibition design group Total Media Development Institute, which is creating the observatory’s interpretation and exhibition space, and was briefed to produce the identity and masterplanning graphics for the venue.

According to Johnson Banks creative director Michael Johnson, the identity and related graphics will operate in both Japanese and English.

‘It is technically a bilingual scheme, but the major market is probably going to be domestic, so I don’t think it is going to be a 50-50 identity. Although the name is quite a mouthful in English, it is only a few characters in Japanese,’ he says.

The observatory buildings are set for construction on a new site in Sendai City, under an architectural plan by architect NTT-F Co, a division of the Japanese technology giant NTT Group. The building process is expected to take 18 months, according to Johnson.

In addition to the exhibition space, the centre will contain a planetarium and telescope zone, and aims to appeal to the public as well as to the scientific community.

‘We are trying to find ways to make the subject of space less baffling, to bring the cosmos down to Earth,’ says Johnson.

Total Media approached Johnson Banks directly last year, following a number of visits to Japan by Johnson through the Department of Trade and Industry, and UK Trade and Investment’s trade missions.

The consultancy was asked to take responsibility for the overall branding of the centre, drawing together the elements of each of the design groups working on the project.

Johnson expects to have a completed brand identity by the end of the year and he says there will be a point at which the design work will be passed over to Japanese consultancies for implementation.

The observatory will be operated by the developer consortium for the next 30 years, according to Total Media creative director Isamu Kawaishi.

The cost of going Green is behind our ‘throw-away culture’