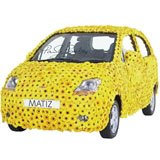 Manufacturers exhibiting at the British International Motor Show this week are eschewing the launch of cutting-edge concept cars in favour of a focus on the feminisation of existing models through collaborations with designers.

The Motor Show, which returns to London for the first time in 30 years, sees Nissan working with Conran & Partners to launch a version of its Micra C&C as General Motors links up with florist Paula Pyrke to create a limited edition floral Chevrolet Matiz.

Nissan’s C&C&Conran features an exterior body colour called Blushing Black – a lacquered black finish accented with red and inspired by Japanese traditional lacquer ware – with red leather interiors, including seats with a leafy pattern that is also repeated on the boot lid, and a red-lined glovebox.

‘We would like to turn attitudes to car interiors on their head and come from a different perspective to the conventional testosterone-driven designs,’ says Conran & Partners director Sebastian Conran. ‘We wanted to design an interior that reflects the zeitgeist and the current boho-chic trend evident in fashion and furniture.’

Pyrke, meanwhile, has designed a yellow gerbera-covered Matiz for General Motors. According to a Chevrolet spokeswoman, the move comes in response to research that reveals 28 per cent of women view style and colour as the key purchasing decision.

Green issues also remain top of the agenda for many manufacturers, with Ford announcing this week that it is to spend £1bn over the next six years on Britain-based research and development projects in environmental technologies.

The primary focus will be on the development of lightweight, hybrid electric and bio-fuel vehicles at Ford plants in Dagenham, Dunton, Gaydon and Whitley.

The British International Motor Show, which has been held at Birmingham’s NEC since 1978, takes place at London’s ExCeL from 20 to 30 July.

Design of the stands:

• Imagination has created the show stand and in-car interface for Jaguar’s XK-R, which gets its global launch at the Motor Show