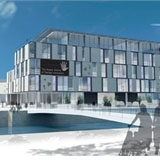 The UK looks set to receive its first dedicated school for design and engineering, with none other than vacuum cleaner innovator James Dyson as its chief patron (DW 13 July). The school, he says, will help to brush off engineering’s fusty image (he deliberately left the word engineering from its name), while enthusing the next generation of students to take up the subject before they reach university.

Using a combination of funds from educational charity James Dyson Foundation, tax-payers’ money and corporate support, the Dyson School of Design Innovation hopes to sharpen the country’s innovation and design sector to meet the ‘threat’ of rising skills in the Far East. It is set to open in Bath in 2008 as the National Centre of Excellence for design, engineering and enterprise, in a new building conceived by Wilkinson Eyre Architects.

‘The idea for a school has been four or five years in the planning, with the decision for a sixth form college coming much later,’ says Dyson. ‘A survey we conducted found that about two-thirds of students would like to do a design and engineering course if one were available. This school will give 14- to 16-year-olds a taster of the subject.’

Wilkinson Eyre’s sustainable design will use water from the adjacent River Avon as part of its heating and cooling system. A central atrium will act as an ‘internal street’, offering what Dyson describes as a science or design museum-like space, housing design prototypes. This ‘museum’ and an accompanying café will be open to the public; it is part of Dyson’s drive to spark interest in parents as well as schoolchildren.

There are also opportunities for designers and design consultancies to get involved in the school, as some courses will be taught by designers from industry, as well as by scientists and engineers. The school is open to discussions with interested parties and invites people to get in contact via the school’s website at www.dysonschool.com.

Similar to the Government’s National Skills Academies, the school will run as a private-public initiative, using support from corporate sponsors. Already lined up are Airbus, Rolls-Royce and Williams F1, but Dyson says he hopes other companies will provide further support through scholarships and equipment.

Although it will not be the first school to hook up with the private sector, there remain concerns about corporate involvement in education and the branding of schools. While welcoming the announcement as a positive move, Priestman Goode director Paul Priestman notes that private sponsorship does raise issues. ‘I would be slightly more uneasy about corporate sponsorship, because you have to ask about their motivation,’ he says.

A spokesman for the Department for Education and Skills says the development will be ‘covered by the normal accountability rules that apply to any public investment’. The benefits, he says, must accrue to the wider public service of education and training, and not to private profit. Naturally, Dyson claims corporate motivation is for the right reasons. ‘I believe that the companies involved are enthusiastic to help out, really, from an altruistic point of view, although, obviously, they do have an interest in more engineers being produced,’ he says.

The involvement of corporate sponsors in education is something that is likely to become more prevalent, according to Julian Grice, managing director of The Team. ‘As the market [for education] continues to grow, there will be more pressure on existing further and higher education establishments, and I’m sure we’ll see more of this as a model,’ he says. ‘But there aren’t many people around with a personal brand [like James Dyson’s] who can do this. Most employer-led academies are a result of the Sector Skills Councils.’

Creative & Cultural Skills is discussing the potential for academies in the creative industries, according to Grice. ‘I don’t see any reason why there couldn’t be a design academy,’ he says. 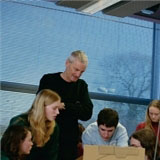 As well as coinciding with this year’s crop of school-leavers and graduates, the announcement of the school comes just as the Design Council and CCS are chewing over the future of the design industry. Education is one of the key issues in this discussion. According to Priestman, who is chairman of the consultation’s Design Skills Advisory Panel, capturing creative students earlier in their education is important. ‘There is a big debate about how you catch creative people who are not necessarily brilliant academically. It is about seeing skills in people that would make a good designer,’ he says.

Part of the debate is focused on the need for a design curriculum in all schools. This could lead to an ongoing thread of design education across different stages in education, for students who wish to pursue the subject.

‘We need a universal approach to how design is taught in schools. We don’t need to know how a curriculum should look at this stage, but we need to agree on the principle that it should exist,’ says Grice.