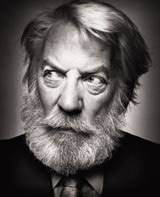 As well as editorial, Platon has created commercial work for Levi’s, IBM, Nike and Motorola among others, and finds the advertising industry in the US to be a ‘completely different proposition. The sets are much bigger, the degrees of freedom fewer. You end up in these boardroom meetings with all kinds of personnel, which would never happen in the UK. It’s a bit like Dr Strangelove,’ he says.

But in the meantime, he’s continuing with his documentary work and hopes to bag a few more titans of the age. He’s already taken presidential nominee John Kerry, who he found to be ‘very nice’, and hopes to get a shoot with George Bush Junior. ‘I’d love it, and I’m actually working on it.’ Whether or not he’ll get Bush the younger to flash a peace sign is, of course, another matter.

Platon’s Republic is published on 5 June by Phaidon Press, priced £35

Platon is appearing at the National Portrait Gallery in July – visit www.npg.org.uk

Muscovite Army battles on regardless

Sea pieces Jigsaw back together

Brown v Board of Education Historical Site in Exhibition