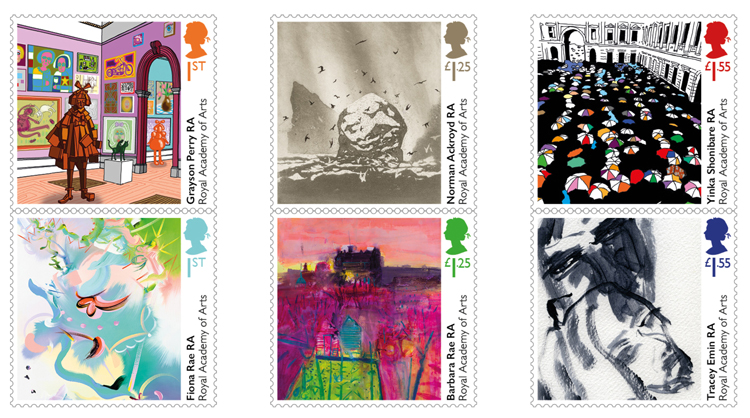 A set of stamps marking the Royal Academy of Arts’ (RA) 250th anniversary have been released, designed by artists including Tracey Emin and Grayson Perry.

Founded in 1768, the RA hosts and supports resident artists, collections, exhibitions, fairs and more. It also has a schools segment, which offers university courses.

To mark its 250th birthday, the Royal Mail has launched a set of six stamps, each one a mini artwork created by “Royal Academicians” – big names in contemporary art and architecture.

The six, stamp-sized artworks aim to reflect each individual artist’s work – for example, Perry’s stamp mirrors the signature, colourful style seen on his large-scale tapestries – as well as the RA’s Summer Exhibition, its annual show that features 1,000 artworks from both famous artists and amateurs.

The Summer Exhibition has been held since 1769, and is co-ordinated by a Royal Academician every year, which will be Grayson Perry in 2018.

Alongside the artists’ work, each stamp has been given a uniform design by an in-house team at the Royal Mail, featuring the Queen’s head in the top right set in various colours, the price underneath, and the name of the artist written vertically along the right-hand side.

All six stamps are original pieces, and have been made using mixed media, including digital graphics, oil on canvas, print on paper and gouache paint on paper. Philip Parker, a spokesperson at the Royal Mail, says: “We are delighted with the range and creativity of these wonderful miniature works of art.”

The set of stamps, along with first day covers and enlarged, framed versions of the small artworks, can be pre-ordered from the Royal Mail’s website, and will be available from post offices nationwide from 5 June 2018.

Earth: bringing our planet to life through an interactive globe and app