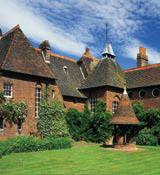 In these dog days, it’s a pleasant experience to go to a historic house with garden complete with shady bowers and cool rooms with exquisite furnishing. So on a baking day, it was a treat to trundle down to Bexleyheath to see Red House, one of the National Trust’s more recent acquisitions. Built by architect Philip Webb for designer William Morris in 1859, Red House has just been opened to the public by the National Trust. And the public is so keen that tours are booked up until late September.

Hang on. Why should a white-hot designer of the early 21st century care about a mimsy old National Trust property dating from the mid-19th century? Because William Morris, so the art historical orthodoxy goes, was a kind of proto-Modernist, whose socialist ideology and polymathic instincts made him the pivotal designer/propagandist of the 19th century. From his work you can draw a line through Charles Rennie Mackintosh and Henri van de Velde, through Viennese Modernists like Adolf Loos and Otto Wagner, right into the heart of rigorous 20th century Modernism. Not for nothing is Morris the starting point for Pevsner’s key 1936 book ‘Pioneers of the Modern Movement from William Morris to Walter Gropius’.

Anyway, it’s always worth returning to the source. And Red House, once surrounded by sylvan orchards and now in a sea of pebble-dashed suburbia, is Morris made flesh, via the skill of Webb. It shows his neo-medievalism, which harks back to some mythical time when noble craftsfolk made useful things that were also beautiful; and it also looks forward to the future, to a 20th century world of fitness for purpose and form following function.

The medieval fantasy aspects of Morris’s ideas are the ones that hit you first at Red House. The porch is a frugal early Gothic-style arch, and the brick is deep red; hence the name of the house. Morris had it built with a community of artists and designers in mind, all working towards the sensibility that would become the Arts and Crafts movement. From the gardens, the house can be seen as a repertoire of medieval motifs: a stepped oriel window, a little porch called the Pilgrim’s Rest at the back of the house and the well with its steep pitched roof.

Most of us know Morris best for his printed fabrics, which used natural motifs, and two can be seen in the house along with stained glass and wall paintings by friends including pre-Raphaelite buddy Edward Burne-Jones.

There are also morally improving Latin slogans on the walls, such as ‘Arts Longa, Vita Brevis’ over the fireplace, which roughly translates as ‘Art is Long, Life is Short’. Arguably it’s the other way around these days.

Morris didn’t have wallpaper himself, as it wouldn’t have been available during his beloved medieval period. Instead he covered his walls with distemper, against which his pendant lamps and fluted wardrobes would have looked stunning; if nothing like a real interior. But maybe that’s one of Morris’ lessons to contemporary designers: that innovation invariably involves some rewriting of the past.