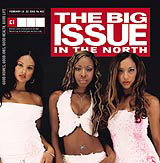 Love Creative is devising the identity for a charity formed by the merger of The Big Issue in the North and community business Diverse Resources, which launches in April.

The two organisations will merge at the beginning of April to form one holding company, but the identity will launch on 22 March at The Big Issue in the North Trust’s Big Difference Awards.

Love is to hold a series of brand workshops to refine the brief for the branding of the as yet unnamed merged charity.

The name of the new company will be carried on the front of The Big Issue in the North magazine, as well as at the trust’s centres which offer training and resettlement services to Big Issue vendors. It will also be seen on the health centres run by Diverse Resources.

The consultancy is creating the visual identity, name-generation, launch literature, stationery and marketing communications material. The website design has not been confirmed. The workshops will be completed next week.

‘Merging with Direct Resources gives our vendors access to a whole range of services, such as health and education, offered by Direct Resources. It makes us a bigger organisation and we can provide the business acumen for Direct resources,’ according to the spokeswoman.

Creactive to roll out train designs