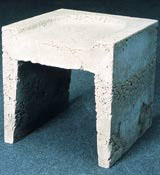 You’ll be forgiven for having two misconceptions: that ‘Hardcore’ refers to ‘adult’ material; and that concrete is the nasty stuff of post-war pre-fab monstrosities that give London its unique monopoly on the colour grey. However, the Royal Institute of British Architects is staging an ambitious exhibition on concrete, covering its chequered history, its unlimited future and its ‘rise from utility to luxury’.

Hardcore, conceived by Scarlet Projects, is a celebration of this elusive material that pervades our cities and generates so much emotional angst. I suggest that you suspend judgment until you have seen the show and the accompanying A-Z of Concrete.

Despite concrete’s longevity, it has an unerring association with modernism. This association is both good and bad. For architecture buffs, it means pilgrimages to Pier Luigi Nervi’s Palazzetto dello Sport in Rome, Le Corbusier’s sublime Unite d’Habitation in Marseilles and chapel at Ronchamp, and Sir Denys Lasdun’s inspiring National Theatre in London. These are iconic buildings that relied on the potential of concrete to realise a freedom of form and texture that had been unprecedented. As the material of modernism, and because of its unfortunate misuse and poor quality in many of the pre-fabricated 1960s buildings, it has also been a scapegoat for a general anxiety about the modern world. JG Ballard’s dystopic accounts of the harsh, inhumanity of the concrete urban landscape in novels like High Rise and Concrete Island, captured this anxiety.

Often whitewashed or covered with a stone faÃ§ade, for many years, concrete was relegated to the position of an unseen structural element and hardly ever found its way into the world of products and interiors. Only a few decades earlier, the picture was very different. Willy Guhl’s 1955 loop garden chair for Eternit made from glass fibre-reinforced concrete is a design classic, and John Lautner’s 1963 Sheats Goldstein House used concrete unrelentingly, including concrete beds, sofas and sinks as the ultimate statement of luxury.

Equally, modernist architecture saw a proliferation of new techniques that explored many different possibilities for the material. The Perret Brothers’ Church of Notre Dame in Le Raincy is characterised by intricate textures and complex form. Oscar Niemeyer gave his buildings sensuous curves, Berthold Lubetkin’s penguin pool at London Zoo used a system of sliding formwork (moulds), and Nervi developed steel-reinforced concrete that enabled him to build thin shells with high span to thickness ratio in his iconic lattice aircraft hangars.

Concrete comes in many guises, and can be subtly tailored to suit different uses. For the National Theatre, Lasdun wanted to achieve an archaic feeling that related to the stone used for Waterloo Bridge, Somerset House and St Paul’s Cathedral. The concrete is therefore textured, and was designed to have a memory as it weathers and changes colour.

Either pre-cast or poured on site, concrete has a bespoke quality. It is also incredibly versatile: it can be dirty, ragged and brutal or sensual and clean; monolithic in scale or used with precision and intricate craftsmanship for detailing and products.

Just as it seemed that the proliferation of high-tech steel and glass design in the 1980s and 1990s had demoted concrete from the material of choice to the material of pre-fab pariahs, concrete is making a comeback.

Architects like Tadao Ando, Rem Koolhaas, Zaha Hadid and Herzog and de Meuron have championed generic qualities for years, but it is only recently that its resurgence has resonated. It is now possible to buy ‘concrete-look’ carpet by Hemingway Design for Milliken, ersatz concrete vinyl, and concrete-effect wallpaper (imitation being the highest form of flattery).

Hardcore is not a sedate exhibition. Block Architects’ ambitious scheme involves pouring concrete directly into the RIBA’s main exhibition hall, bedecked by reinforced cages, shuttering ply enclosures and an underpass that curves into infinity, thanks to a trick with light and reflection. The idea was to create an experience that is about innovation and experimentation, but is also about familiarity and the sense of concrete as the generic substance that makes up many of the unremarkable, but aesthetically distinct, components of a city.

The content of the exhibition covers the history, manufacture and use of concrete, and also showcases ‘innovations’ and technical work that is transforming concrete’s potential. Jewellery designer Kelvin Birk presses concrete between smooth layers of silver, sometimes embedding precious stones in the aggregate. He was attracted by the plasticity of concrete, ‘concrete is easy to adapt, controllable up to a point, but you still are never quite sure how it will look when it comes out of the mould. That is part of its attraction, all the pieces are unique.’

Cast Concrete Technology and Product Design has developed concrete mixes and manufacturing techniques to render Mass, a lightweight, strong surface material, designed for the rigours of kitchen worktops, bathroom surfaces and bar tops. It is factory-sealed, waterproof, stain resistant and very thin (30-100mm). Mark West’s fabric formwork is a technique that enables concrete to be moulded to form columns, beams and panels, while John Outram Associates’ pigmented concretes play on the iconography of colour and form. Field Day’s grass benches are pre-cast, reinforced concrete, with a cavity to house soil and plants. They blur the boundary between interior and exterior – drawing on concrete’s brutal quality that makes it surprising in the domestic context.

Design group Graphic Thought Facility based its exhibition typeface on a process of rendering type in concrete. While the technique was eventually limited to the group’s photo-etched pet gravestones, GTF realised that concrete’s chameleon-like properties necessitate close collaboration between the design and manufacturing processes, and the experimental theme of the exhibition reflects this.

The premise of Hardcore is to give concrete back its reputation for what Hadid describes as the ‘liquidity of form-making and structural prowess’. But its weight can be prohibitive, its quality is difficult to control and the labour required in its manufacture and use is anything but cheap (in contrast to the cost of the composite itself).

Concrete, whether it is used for structural or decorative purposes, is just one of the many elements that go into the design of a product or building. The ‘concrete’ roof canopy of Hadid’s tram station in Strasbourg, for example, contains more steel than anything else.

As Ando, the godfather of concrete, suggests, ‘Although building material is an element that creates space, Material alone cannot be an architect’s theme. Concrete is not my theme; rather, I am concerned with spaces enveloped in concrete.’ Perhaps the power of concrete lies with its enabling qualities rather than the inherent properties of its aesthetic. m

Hardcore is at the RIBA Gallery, 66 Portland Place London W1 from 26 March until 25 May

Capturing your group’s values pays off with clients