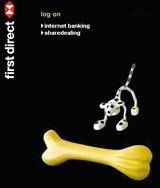 First Direct, the HSBC-owned telephone and Internet bank, will unveil a First Point redesigned website next week, as the original direct banking operator signals its intention to dominate the growing on-line arena.

A First Direct spokeswoman denies the project heralds a wider revamp of the brand’s identity. But she confirms Attik, already on the bank’s roster, is working on a small identity job through its Huddersfield office.

The updating of the website, www.firstdirect.com, comes in response to changing market trends. Over half of the bank’s million customers, principally young professionals in south-east England, access their accounts on-line or via SMS. The on-line channel has experienced ‘phenomenal growth’ in past 12 months, comments the First Direct spokeswoman.

‘When we launched telephone banking it was a new proposition and our customers were attracted to that. They’re now adopting the Internet in the same way,’ she adds.

‘The existing site had become unwieldy and a bit of a maze. We’ve made navigation cleaner and clearer, and slimmed the site down. Information is presented in bite-size chunks and we aim to have an image on every page. Each product area reads almost like a postcard,’ he says.

The major visual change is a move from a predominantly black and white palette to a colour-based scheme with fresher imagery. Interactive features such as calculators have also been updated.

The Harrogate-based consultancy has worked with First Direct for almost seven years.

It began working on this project three months ago.