Black Lives Matter has prompted a branding crisis. There is the rice brand Uncle Ben’s, which uses the symbol of a Black man on its packaging. ‘Uncle’ has historically been used in reference to slaves, and before 2007 he appeared as a waiter in the logo. Mars, which owns Uncle Ben’s, released a statement saying that it is “the right time to evolve” after talks with consumers and employees. It was also announced that Aunt Jemima – a pancake mix that uses a racial stereotype as its logo – will be rebranded. The impact is widespread. There’s the University of Virginia’s logo which will be redesigned because of its slavery references; a rebrand of Eskimo ice cream; and a rethink of Colgate’s Darlie toothpaste (which is marketed as ‘Black Man toothpaste’). It affects place branding too. Rhode Island, a seaside state in New England, U.S, is now seeking to change its official name – The State of Rhode Island and Providence Plantations – because of slavery ties.

“What we’re challenging when we’re challenging branding or symbols, is the story they’re telling and the narrative they represent,” Greg Bunbury says. “It should represent where we are now, not where we were in 1865.” Bunbury, a graphic designer and creative consultant, was behind London’s ‘I can’t breathe’ poster campaign – a tribute to Black people who have been killed by the police. He puts the current branding in a wider context.

“Whether Aunt Jemima is on the packaging or not doesn’t change a product,” he says. “It’s the resistance to changing the narrative that makes it interesting.” Bunbury says there’s “nothing positive” about the Aunt Jemima branding, and he is “more than happy” to see these changes, but he wants the conversation to stay “focused” on where the real change needs to happen. “A lot of the solutions are symbolic,” Greg Bunbury says. “But it’s the kind of fight that needs to happen.” It needs to happen on a symbolic, organisational and emotional level, he continues, which is what makes it so “challenging”. It is, in some ways, a Catch-22: “symbols and statues don’t create racism, they’re artefacts of it.”

“We decide what we want to say about ourselves” 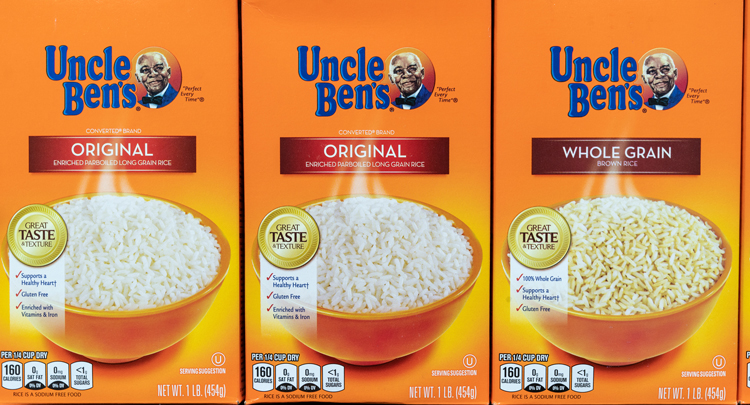 By changing these symbols, he wonders if there is a danger of “attacking the symptoms and not the disease”. “Essentially the problem is structural,” Bunbury says. It is the result of creative industries that aren’t representative of society: in the UK, only 4.7% of executives at creative agencies identified as Black, Asian and minority ethnic groups in the UK in 2019, which was a decrease from the previous year. A 2018 Design Council report showed that only 12% of all design managers and business owners were from minority ethnic groups. These figures would decrease further if specifically about Black people.

Still, Bunbury remains positive. After Design Week spoke to him about his ‘I can’t breathe’ campaign, he says that businesses got in touch to talk about how to “meaningfully change”. “I’m happy to step into that role,” Bunbury says. At the moment, he is in the process of setting up a website that would pool Black creatives so that design businesses cannot hide behind claims of not knowing where to find diverse talent to hire. “The design community has a massive role in this process, but we need representation.” He adds: “When you walk in a room, and there’s no one like me in there, that’s a problem.”

“These are opportunities for us as a society to decide what we want to say about ourselves and how we want to be seen,” he says. In terms of globalised market, it’s also better for business. As ever, Bunbury is practical: looking at it from a business, moral and emotional view all at once. In particular, he says it means we can use our skills in service design, UX design and policy.

It is worth being cynical about such changes. Hanisha Kotecha, who recently set up brand consultancy Reset Sessions, asks: “Why do they think removing his face is a big step in terms of racial justice?” “It makes you wonder what went into the process of putting him there in the first place,” she says. It will be “interesting” to see how the brand proceeds in an anti-racist manner, Kotecha says.

Reset Sessions – set up in collaboration wtih Nicolas Roope – is about making the most of a crisis, acting with agility, and finding a purpose for the brand. So what could Uncle Ben’s do? Kotecha says there’s an opportunity to retain a Black symbol which “stands for something positive”. “They’ve got a lot of money and a lot of power,” she adds – which provides them with an opportunity to come back “stronger” than the brand was before.

Aunt Jemima is more complicated, she says. The brand identity is based on Nancy Green, a freed slave and activist who had worked as a chef for a Kentucky family. Green became the face of Aunt Jemima (who is a ‘Mammy’, a slave who acts as a housekeeper for white families) in a branding story that blurs the line between truth and marketing. “There is heritage there in honouring that woman,” says Kotecha. By taking her away, there could be a danger of “rewriting history”. “Inadvertently, by removing her face from packaging, you’re also erasing her historic significance,” she says. “If anything, I reckon they should rename it as Nancy Green, and make more of who she actually was.”

“Do more than just correct the error”

Oftentimes during rebrands, designers are keen to keep the more heritage aspects of a brand. Like Liberty’s signature purple or Yale’s sunny yellow: these are recognisable touchpoints which are important in attracting consumers. Moving forwards will be a difficult process. But when these brands come back, they need to see it as an “opportunity”, she says. It’s not about “brushing over” a mistake – “do more than just correct the error.” This echoes Bunbury’s comment about changing structures within the creative industries, and Kotecha highlights three pillars: policy, rituals, and communication.

Communication covers how things work internally, in creative teams and with stakeholders. Policy covers the “DNA of the brand”: a belief system which a brand holds itself up against. And rituals are how you practice these policies. If they can create a system with clear ideas around these pillars, Kotecha says, brands “can’t get it wrong”, and ultimately work will be better. “It’s about consumers buying into a belief, not just rice,” she adds.

This will likely require overhauls of how companies work. You don’t get “diversity of thought” in classic hierarchical structures, she says. “You might not feel safe stating something that might seem completely obvious to you,” she says – true not just for people of colour, but anyone junior. It’s also about diverse networks within the industry. “I’ve looked at CEOs and CCOs of companies who have handled Black Lives Matter statements really badly, and if they had one person in their friend group who was a person of colour, they would not have reacted like that.” “Just because it’s not a problem for you, doesn’t mean it’s not a problem,” she adds.

Despite the scale of the challenge, Kotecha is “excited” about this period. There’s a real opportunity, she believes, to “shake things up”. And it’s also a crunch time for brands. If they don’t manage to appeal to the more open and insistent viewpoints of millennials and Generation Z, they’re losing business.

“Be prepared for people not to receive you warmly”

Racially insensitive branding goes beyond Aunt Jemima and Uncle Ben’s. Cultural strategist Leonie Annor-Owiredu explains that this could stem from a more “insidious form” of racism in the UK. Brands have often used African American vernacular (AAVE), which has been popularised across the globe, as a promotional tool. Or they have used terms from Black communities in Britain – like Jamaican slang. This has been long documented, so a quick rebrand is unlikely to fix it.  “People remember that you’ve taken bits and pieces to sell products,” she says, without crediting Black communities. “Be prepared for people not to receive you warmly at first,” she adds. “It’s about patience and getting comfortable with people being wrong.”

Annor-Owiredu set up Diversity in Action, an organisation that aims to implement change in companies, from cultural training (teaching around unconscious bias, for example) to revamping Human Resources departments. She is also interested in how cultural institutions – historically white organisations – can sustain recent announcements about change. When the statue of slave trader Edward Colston was toppled by activists in Bristol, new attention was brought to Colston Hall, a leading music venue in the city. It had already planned to change its name, and a representative confirmed to Design Week that this will be going ahead in the autumn. In South London, the Horniman Museum has been criticised for the founder’s links to plantations. The issue of branding within these cultural institutions is not new: London museums and galleries have long been criticised for their links to the Sackler family, for example.

It is easy, once again, to view these changes with suspicion. But is it possible to view them as welcome signals? “In some ways, it’s like, finally,” Annor-Owiredu says. It is possible that a symbolic change could attract more diverse interest. But it is also a delicate balance, and history has made Black communities wary of these trends, she says. “We’ve been through this in culture, as Black people, so I’m happy about this revolution. But I’m also thinking: how long will it last?”

Again, issues around branding boil down to business too. Kotecha points out that if these institutions don’t update branding, they’re limiting their potential audience. “Quite quickly, if you’re not relevant or speaking in a way that your audience want to hear from you, you’ll just be defunct.” “People will make a decision for you if you can’t get your shit together.”