Tommy Jeans, the youth-oriented offshoot of the Tommy Hilfiger brand, has been redesigned to give relevance to the label and differentiate it from its father brand.

The work has been led by international consultancy DesignStudio, and includes a refreshed colour palette, new graphic devices, an updated tone of voice and motion principles.

Back in the 1990s, the Tommy Jeans brand was widely popularised by those in the hip-hop music scene. But in the years that followed, the label began to suffer heavily from counterfeiting, to the point where the logo “lost its value somewhat”, according to Design Studio creative director Eric Ng. 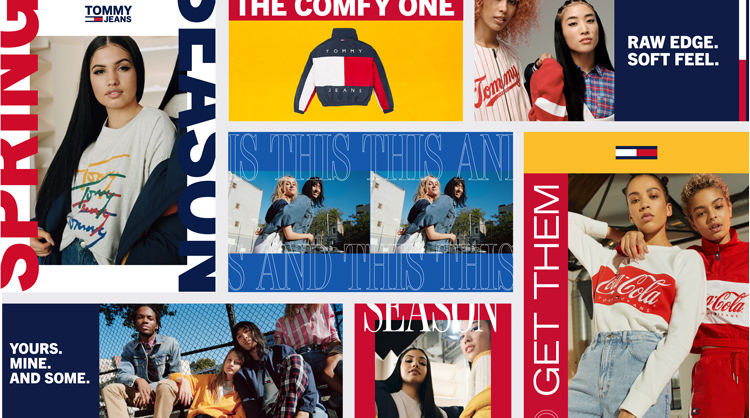 The brand was left untouched for years, until the recent revival of 1990s fashion by the millennial generation gave it a renewed sense of relevancy. But as Ng explains to Design Week, the brand was not equipped to deal with the digital-first landscape of 2020, nor did it have the assets to “exist beyond just the Tommy logo”.

“When we were approached with the project, there was only a very small set of guidelines for the brand,” he says. “They had the logo, the tri-colour palette and two fonts.”

With a limited starting point, Ng says the DesignStudio team identified two main challenges to be solved: how could Tommy Jeans could be differentiated from the wider Tommy Hilfiger brand, given the logos and graphics were so similar; and how the brand could exist beyond just the logo, and actually “embody the attitude and spirit of Tommy in the 1990s”.

The first step in the process was to implement two new graphic devices to the brand. The first is a layout system based on the flag within the Hilfiger logo. According to Ng, it acts as “a simple panelling system” which can allow the brand to stack blocks of colour and imagery within the frames. The second graphic was inspired by the “infamous boxer bands”, found on the top of Tommy Hilfiger underwear, he says.

“We didn’t want to just put type and logos into the band system, as you would just see on boxers,” says Ng. “So instead we’ve added graphics, type and messaging in there too.”

Both graphic systems, Ng says, are effective ways for the brand to display content digitally. This was something Tommy Jeans had previously struggled with, as a brand that was first popularised before the advent of social media. The graphics form part of a wider set of motion principles, which he adds have been devised to ensure “the graphic language always moves in a way that is energetic and impactful”. 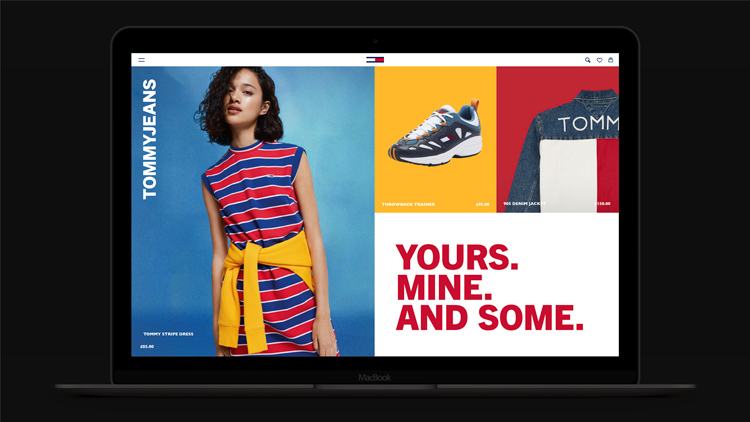 Beyond the graphics, the team has also updated the colour palette to reflect the younger-leaning audience of the brand. While the core remains the red, white and blue also used in the wider Tommy Hilfiger branding, greens and yellows have also been adopted. This creates a differentiation between parent company and daughter company, Ng says, while also paying homage to the “1990s aesthetic” of the brand’s beginnings.

Alongside 1990s-favourite colours, the studio further leaned into Tommy Jeans’ past by exploring the label’s archives. Old motifs and graphics from clothes have been “brought back into the mix”, says Ng, with the intention being to give everything more flexibility and energy in the digital-first age.

But while the brand was largely revived by those reminiscing about the past, Ng stresses that Tommy Jeans’ new look still had to relevant in the context of 2020. 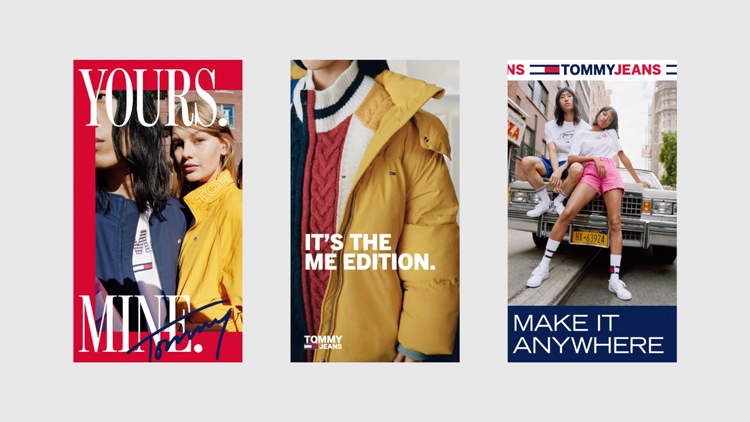 “A big part of Tommy Jeans is this idea of the modern American Spirit,” he says. “We had to question what that phrase actually meant, and then consolidate it into something more tangible.”

With this in mind, the team introduced a new set of photography principles which champion the idea of being “bonded by differences” and encourage diversity across brand communications. Similarly, a more confident and casual tone of voice has been created.

“Creating this modern Americana voice in 2020 was important, but we also needed it to feel comfortable with Gen Z and millennials,” Ng says. “So no over-egging, no over-explaining.

He ends: “People know what the product is about already, we don’t need to oversell it.”