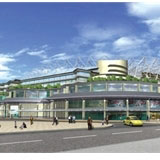 Ahead of its £100m redevelopment, Twickenham Stadium is to be rebranded as an entertainment venue with an identity and wayfinding system created by Hat Trick Design Consultants.

Hat Trick was appointed to the project following a five-way credentials and strategy pitch held last month. It is tasked with creating a cohesive identity to brand the entire stadium complex, which is being reimagined, more broadly, as a venue for entertainment. It is also increasing its current capacity of 75 000 spectators to 82 000.

To support the revamped brand identity, Hat Trick is conceiving a redesigned wayfinding system to guide visitors around the stadium complex.

The consultancy is working in collaboration with wayfinding consultant Richard Conn on designing an appropriate solution for the venue. Hat Trick partner Gareth Howat is heading both projects, which will run in tandem with each other.

The South Stand at Twickenham is being reconfigured with a scheme drawn up by architect Ward McHugh Associates.

The venue will hold a new 156-bed, four-star Marriott Hotel, additional exhibition and conference space, a Virgin Active health and fitness club, a 400-seat performing arts centre and a revamped Rugby Football Union store, which is being designed by Astound.

‘You are branding a place, rather than an event, so it becomes a big experience. It is like an entertainment venue competing for people’s leisure time,’ says Jim Sutherland, a partner at Hat Trick.

The identity project is in the very early stages, but the brand is likely to be modern and will steer away from the existing identity designed by Springetts, which firmly links the stadium to the Rugby Football Union and features a rose motif. Springetts also created signage at Twickenham and corporate stationery as part of the branding project (DW 27 August 1999).

‘The stadium is not just about rugby; it is concerned with concerts and exhibitions. However, it is tied in with the Rugby Football Union and must sit alongside it,’ adds Sutherland. As the project progresses, Hat Trick anticipates creating a website, literature and additional brochure material for the stadium.

The brand identity and wayfinding system will be completed in time for the stadium to host the Autumn Internationals in November, when the South Stand is due to reopen. The commercial facilities will open from June through to September next year.