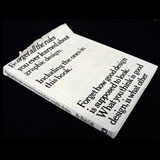 As a student at the Central School of Art and Design in the early 1980s, I came across a book called Forget All the Rules You Ever Learned about Graphic Design: Including the Ones in this Book, by Bob Gill, and, ever since, have found the best way to tackle any problem is not to follow the expected conventional route, but to reframe the question.

I’m inspired by good ideas and by words. One of my personal little maxims is, ‘If it’s worth doing… it’s just worth doing’ (it’s a bonus if it’s done well) and I follow a ‘nothing ventured, nothing gained’ philosophy.

I’m an action person who often works out the details later. I admire, greatly, people who are meticulous and painstaking, but my brain doesn’t work that way. I can visualise how I want things to be, but as I thrive on adrenalin, I scare myself, sometimes, when everything comes together at the last minute. I enjoy being told, ‘You can’t do it that way’ or ‘You’ll never get everyone to pull together on that’ or ‘It’ll never work’, as it spurs me on.

I am also hugely inspired by the smallest amount of positive encouragement – which, luckily, the Cardiff Design Festival has attracted in bucketfuls.