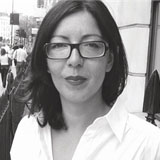 She joins Marsteller as it seeks to grow its integrated media offering. She will be at the helm of this strategy, overseeing the expansion with a long-term goal to align Marsteller London with its other international offices.

Collier (pictured) was formerly creative head for the in-house design and audio-visual team at GCap Media, the UK’s largest commercial radio operator. She was responsible for design and audio-visual projects across 16 analogue radio brands, including Capital FM, Choice FM and The Mix Network, and more than 100 digital stations. She set up Authority Design with partner David Collier, a cross-media design consultancy specialising in the entertainment sector, after losing her job in a spate of redundancies last year.

‘I am looking forward to getting involved with a creative and strategic approach, and working on global accounts,’ explains Collier.

She replaces ex-managing director Mark Rollinson, who left at the end of last year. Rollinson was a co-founder of Giant, which he set up with Alan Herron, Neil Smith and Martyn Hay. The partners sold the consultancy to Burson Marsteller in 1997 for an undisclosed amount.