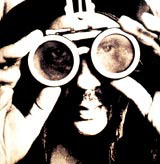 Web design is like spray-painting. That’s the view of Futura, and he should know. He started out as a graffiti artist 30 years ago, but is known by his younger fans for his Internet work.

The 45-year-old American makes a good case for the similarities of the two genres. “Like spray painting, computers are a very spontaneous medium. There’s a quick-dry nature to putting your work up on the Web,” he says. His own website gets 10 000 hits a week.

But these are not the only disciplines for which he is known. Through a series of patron-like client relationships, he has become involved in the worlds of fine art, record sleeve design, fashion retailing and identities. For Futura is that unusual phenomenon, a multidisciplinary, self-taught graphic artist, whose cult status means he’s revered by “hip kids” and big corporations alike.

He has hung on to, and even enhanced, his innate coolness over the decades, so that he is furnished with enough street cred to have some going spare.

One of his patrons is James Lavelle at Mo’Wax Records. They have been working together for eight years, and probably the best known work from this collaboration are the designs for the 1998 hit album, UNKLE.

And it was Lavelle’s idea for Futura to put together a book of his own work – a book which has done so well that a second edition is coming out next month.

The book tells Futura’s story from graffiti to the Internet via the art galleries, using a mixture of visual styles, cartoons and text. “A lot of kids know my Mo’Wax work or stuff from the 1990s, like the Internet, but they don’t know my story,” he says.

The story starts in his teens, when spray-painting “was an answer to the angst I had as a kid”. After a spell in the US Air Force, he returned to New York and in the 1980s worked as a cycle courier, when he was taken up by AgnÃ¨s B. She encouraged him to create pieces to show in Parisian galleries. Looking back, “the gallery experience was a bit daunting and I probably had no place there,” he admits. But it was through this exposure that Lavelle got in touch, and asked Futura to design record sleeves for his label.

It is by working with this “family” of clients, which includes Japanese fashion label A Bathing Ape, that he supports his studio set up in Manhattan. Actually, he and his main partner Stash, are soon to relocate the studio to Brooklyn, where they both live.

It’s an informal work environment where at any one time, a handful of young wannabe designers and artists are encouraged to hang out and use the resources, picking up smaller projects or helping out when Futura himself is busy with other things.

The business also extends to three stores, called Recon, in New York, San Francisco and Tokyo. Futura is particular about his clothing label Futura Laboratories being presented in the right environment. “We create our identity and image base (in-store), and it gives us the autonomy to represent ourselves properly, rather than as another label in another store.”

It is as a result of his quasi-underground image that big brands want to use him to pin down that ever-elusive market – the kids. These brands are particularly interested in making something of his trademark characters – little military-style aliens all with their own names, qualities and personality traits. He uses them for A Bathing Ape, but says he’s stingy with them. “If these creations are my kids, I don’t let my kids hang out at anybody’s house.”

He was approached, for example, by a big ad agency to create something for a chocolate company, targeting young children. But he turned it down. “Pay-days and jobs don’t excite me. People excite me. I’m not a big business machine. I don’t want to dilute the projects by spreading myself too thin.”

Offers from Reebok, Adidas, Columbia and EMI have met with the same response, and with good reason, for Futura, despite his disinterest in business, is astute enough to recognise his own worth. “If I sold out to the establishment it would alienate the kids,” he says.

And such dilution could devalue the work he does with his long-term clients. “I have found people who are very supportive of what I’m doing and have established a relationship with them. I’m working with four or five companies who pay me well. Why would I then want to hook someone else up with that special magic?

“My (current) clients see me as Futura the commodity, but because it’s based on friendship they don’t take advantage of me. And we have grown up together. My loyalty is based on their vision and their belief,” he says.

Some of this attitude is reflected in his own website, located at http://home.dti.net/futura – a relatively low-tech site that works as a seemingly endless series of crafted pages. “I don’t think of myself as a Web designer, I use it to create a representation of who I am,” he says. He is definitely not selling work over the site. That would seem unethical, “I have taken the space for freedom of speech and I don’t want to taint that with money,” he says.

Where does he go from websites? “Film is my next frontier,” he says, citing Stanley Kubrick as his hero. The plan is for non-fictional documentary-style films, involving his family. “I’m trying to continue to move ahead creatively and look for new challenges and surprise people,” he adds. There is another, more practical reason for this shift: after all the physical exertions of spray-painting, “45 is a good age to step into mental things”, he maintains.

Futura is designed by Ben Drury and published by Booth-Clibborn Editions, priced £30